The USDA confirming what are the best national soybean crop ratings as of mid-September ever, increased it's already record yield forecast for the 2016 U.S. crop by a sizable 1.7 bushels per acre (bpa) 50.6 bpa, the third all-time high in a row topping the prior peak set last year of 48.0 bpa.

Similar to what we did with corn, this graphic shows the September USDA soybean yield estimates for the top 18 producing states and the U.S. in bushels per acre, the percent of the 1989-2015 trend and at the bottom where this year's yield ranks in the period 1989-2016.

Finally, as one would expect, when the national yield is a record is that a number of top producing states also had their best all-time yields with ten including Il, IN, IA, KS, KY, MO, NE, OH, TN and WI seeing their best yields ever and another five including AR, LA, MI, MN and MS seeing their second highest soybean yields ever with no state having below trend yields.

As a side-note, sentiment is that the final 2016 U.S. corn yield may come down from the current 174.4 bpa projection because even though this is a new high national yield only five of the 18 states had their top yields while in other years where the U.S set a new all-time high yield even more states had their best years ever including nine in 2014, twelve in 2009 and thirteen in 2004.

For soybeans though, the ten states having their best yields ever may be the highest number ever for a single season topping other record national yields such as six last year, nine in 2014, seven in 2009 and eight in 2004. 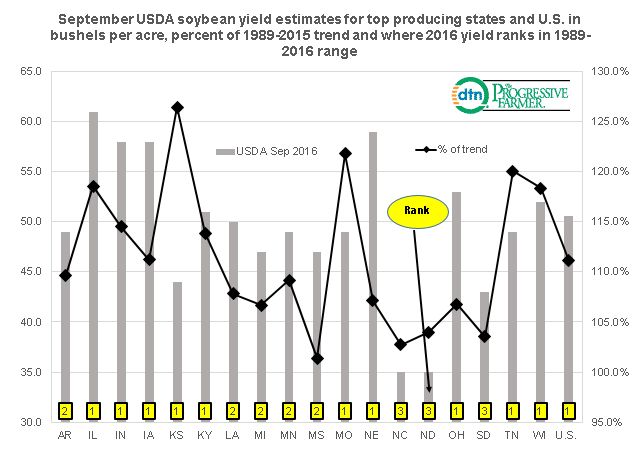