The USDA released its second field based crop production report earlier this week with the USDA maintaining record yield forecasts with corn at 174.4 bushels per acre (bpa) actually down from the August 175.1 projection, though far above the 2014 record of 171.0 bpa.

The soybean yield which the USDA had projected as 48.9 bpa last month increased by a sizable 1.7 bpa to 50.6.

While a previous post had noted how most of the top 21 corn and soybean producing states had a warmer than normal August particularly in a number of eastern producing states, perhaps more noteworthy was how wet it was in comparison to past Augusts.

This graphic shows the August 2016 precipitation in inches for the top corn and soybean producing states, last month's rainfall as a percent of the 1960-2015 August average.

In addition, where each state ranks in terms of August precipitation from the period 1960-2016 is also reported in the yellow circles.

Looking at the data clearly August was wet which is no surprise given that for the U.S. as a whole, rainfall last month was the 24th highest since record keeping began in 1895.

Looking specifically, both Arkansas and Louisiana had their highest amount of rains since 1960 with Illinois, Indiana, Minnesota and Missouri having their second highest amounts and Texas their third greatest August rainfall since 1960.

In fact, all but three states had above average August precipitation though Colorado at 99%, Nebraska at 96% and North Carolina at 92% were close.

This moisture in particular is seen as very beneficial for soybean yields, a crop that probably handled the above normal summer temperatures better than corn. 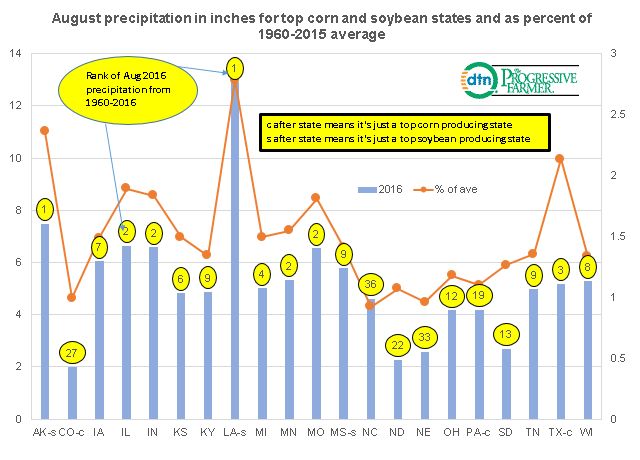