The accompanying chart above shows the net monthly change in both spot corn futures in cents per bushel on the left hand axis and spot soybean meal futures on the right hand axis in dollars per ton. The net gain of $61.80/ton is the largest one month advance since an $84.80 rise in October 2014 while the corn rise of 38 cents is the largest one month gain since corn popped 62 cents last June. We have discussed some of the factors that have boosted these markets higher but to review;

· The U.S. dollar has made a major reversal and anyone with a technical bent could say this looks like a head and shoulders top that could project values back down to the 84.00-86.00 level. Wild gyrations in the financial markets earlier in the year, weak economic growth in the rest of the world especially in China and muted inflationary pressures have market participants convinced that maybe one or perhaps two interest rate hikes will be undertaken by the Federal Reserve Board as opposed to the four anticipated earlier. Needless to say the dramatic reversal in the greenback's fortunes has buoyed a number of commodity complexes, the grain and oilseeds included.

· After a mostly favorable growing season the month of April posed problems for the Argentine soybean crop with excess wetness during harvest and for Brazil's second corn crop as extended dryness has hurt crop development during the key pollination period. The trade is trying to ascertain exactly how much production may have been lost but some say Brazil's corn output may be down as much as 10 million metric tons from the 84.0 million last estimated by the USDA while Argentina's soybean crop could be 5 million less than the 59 million tonne USDA projection.

· It appears that the trade is getting increasingly concerned about what could be a relatively quick transition from an El Nino weather phenomena to a La Nina event with the former considered benign for U.S. row crop development and the latter less so. The latest El Niño Advisory/ La Niña Watch from NOAA indicates that El Niño is present and is weakening and a transition to ENSO-neutral is likely during late Northern Hemisphere spring or early summer 2016, with an increasing chance of La Niña during the second half of the year. The latest CPC/IRI Probabilistic ENSO Outlook that was updated April 14th is shown below and basically by late summer the chances of a full blown La Nina event are now 65-70% and the next forecast will most likely up those odds even more. 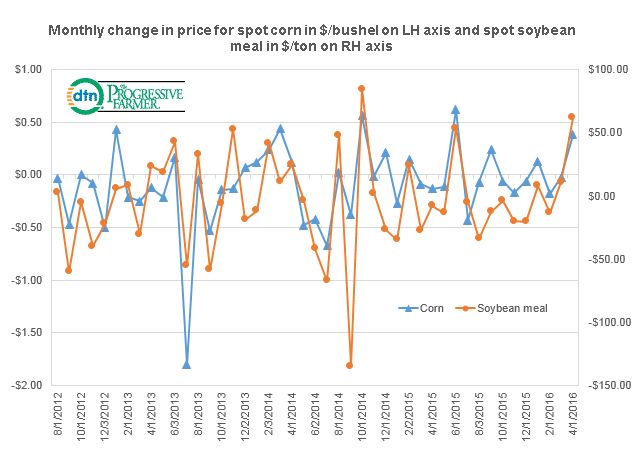