Action in the grain and oilseeds complex has been dynamic to say the least with very few in the trade anticipating this kind of rally, especially in the soy complex.

Fund buying has been record by huge amounts as total contracts traded some days over the past week in soybeans in bushel terms was more than the 2015 crop total as spec money just continues to pour in.

We cannot overstate the fact that crude oil holding firm even with no production freeze agreement last weekend, the fact the Fed may not hike interest rates again till December and ideas that recent interest rate cuts and monetary stimulus has allowed the Chinese economy to at least stabilize have all been supporting factors for the current grain and oilseed rally.

Fundamentally there has been some concern registered about a quick transition from El Nino to La Nina type weather conditions in the U.S. that could prove adverse to U.S. row crop production this summer.

Perhaps the most fundamental reason for this price surge has been a deterioration in South American crop prospects with incessant rains in Argentina leading to soybean quality and quantity declines and ongoing drought in the area where Brazil's second corn crop is planted.

Brazil is short on corn having actually exported too much of their first crop based on favorable exchange rate considerations and now end-users find themselves short and are bringing in Argentine corn and purchases of U.S. product are now likely.

The situation in South America is quite fluid and the latest weather forecast suggest that Argentina will dry out next week at the same time that Brazil starts to receive increased precipitation.

Interestingly in last week's USDA WASDE report, total South American corn production for the 2015/16 season was upped by one million tonnes to 112 million while combined soybean output was boosted by 0.50 million to 159.0 million tonnes.

This graphic shows the percent change in combined Argentine and Brazilian corn and soybean production from the April to July WASDE report.

Interestingly most years show an upward adjustment in those ensuing three months but in 2010 combined corn output fell by 1.5% and soybeans by 5.4%.

Those losses applied to this year's crop could result in a decline of 1.70 mln tonnes of corn and 8.6 million of soybeans, sizable but certainly not justifying the kind of price moves seen over the past fortnight especially given a backdrop if more than comfortable global grain and oilseed supplies. 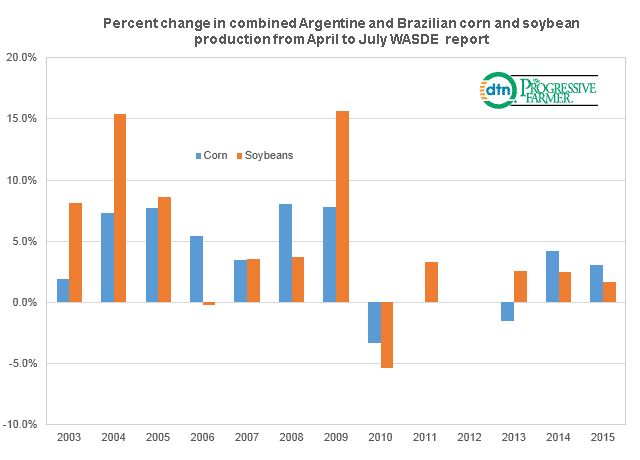