Since September 10th, the 2016 November soybean/December corn ratio has risen from 2.10 to 2.64 with much of that move occurring since mid-April.

A number of factors have conspired in recent weeks to boost the grain and oilseeds complex higher including a lower valued dollar, a rising crude oil market and more evidence that the Chinese economy is on more solid footing heading into the second half of the year.

This has created a more favorable backdrop for commodity investments attracting the attention of the hedge fund community as they have amassed a record long position in the soybean and soybean meal markets.

Another reason why the ongoing soybean price advance has outpaced that of corn are expectations that the upcoming May WASDE report will show soybean stocks tighter for the upcoming 2016/17 season than this year while next year's corn carryout could balloon to 30 year highs.

The accompanying chart shows the continuous monthly November soybean/December corn price ratio with the long-term average and the plus and minus one and two standard deviation lines.

Note that the average plus one standard deviation line is at 2.68 meaning that only 17% of the time since January 1970 has the ratio been above this level suggesting that buying December corn and selling November soybeans on a ratio basis may be an interesting trade especially for those that feel soybeans have run far enough vs. corn on a relative basis.

Note however that twice just within the past three years the ratio has run as high or even higher than the average plus two standard deviation line of 2.96 where the SX/CZ ratio exceeds only 2.5% of the time, suggesting that even though the current ratio is in lofty territory it very well could move higher especially if the funds continue to favor the long side of soybeans more than the long side of corn. 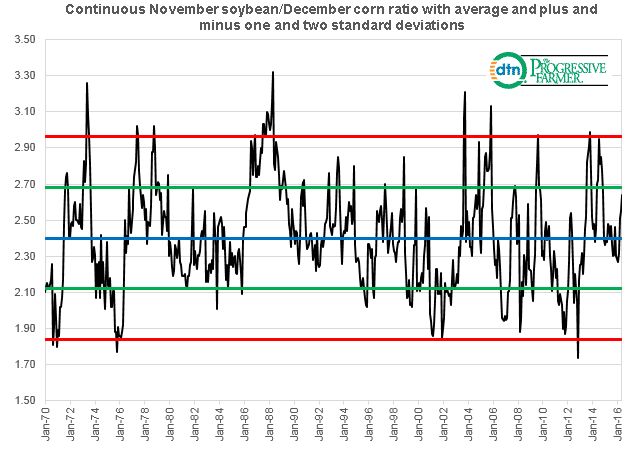