The USDA will issue a number of reports on Tuesday January 12th including the final 2015 row crop production figures, the monthly world supply-demand estimates (WASDE), quarterly grain and oilseed stocks both off and on farm as of December 1st, and the government's first estimate of 2016 U.S. winter wheat seedings.

Meanwhile, a high valued dollar and ample competitor supplies at lower prices are likely to result in a lowering of U.S. export projections of corn, wheat and soybeans.

The trade is also anticipating a low Sep-Nov corn feed use figure due to increased milo utilization and a mild fall and winter resulting in greater feed efficiency rates.

This high rate of usage in the first quarter of the year prompted the USDA to hike total 2012/13 corn feed demand by 300 million bushels to 4.450 billion in the January 2013 WASDE report.

The following year first quarter usage was 44.5% of the December 2013 feed estimate prompting the USDA to hike feed demand by 100 million bushels in the January 2014 WASDE report.

Last year even though estimated Sep-Nov corn feed use at 41.4% of the December 2014 WASDE feed projection, the fourth highest percent ever, the USDA actually pared total estimated 2014/15 feed demand by 100 million bushels.

This may have been due to the fact that final 2014 corn production was pared by 191 million bushels with the USDA assuming that the resultant higher prices due to the reduced supplies would pare feed demand for the rest of the nine months in the 2014/15 marketing season. 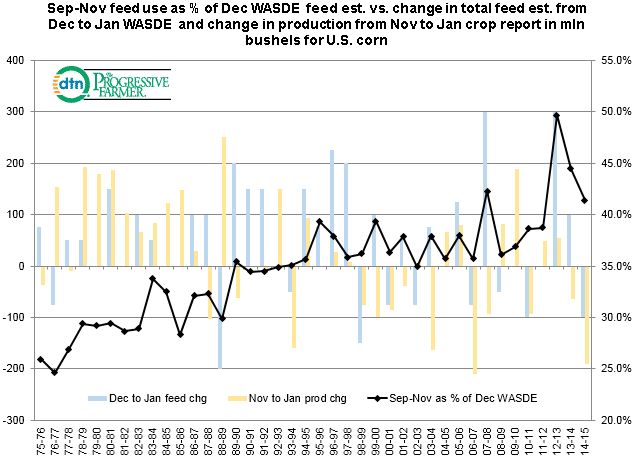