The jury is in and despite some early season excess precipitation in the Eastern Corn Belt with that same area suffering from extended dryness during the summer, the U.S. national corn yield is the second highest ever at 168.4 bushels per acre (bpa) trailing only the year ago record of 171.0 bpa.

Despite a very favorable end to the growing season with a much later than normal first fall freeze for even the key northern producing states leading to trade expecting a hike from the November 2015 yield estimate of 169.3 bpa, the USDA actually lowered the final yield.

The accompanying graphic shows the actual 2015 and forecasted 2016 trend yields for the top 18 producing states and the U.S. along with the 2015 yield as a percent of trend and as a percent of the 2014 yield. Note that we are using a 25 year trend.

This past season Iowa had the highest yield of any of the top states with a new record of 192.0 bpa, one of seven states that set all-time high yield markets vs. the nine states the year prior.

This is the first time that Iowa, normally the highest yielding state has had that honor in four seasons. 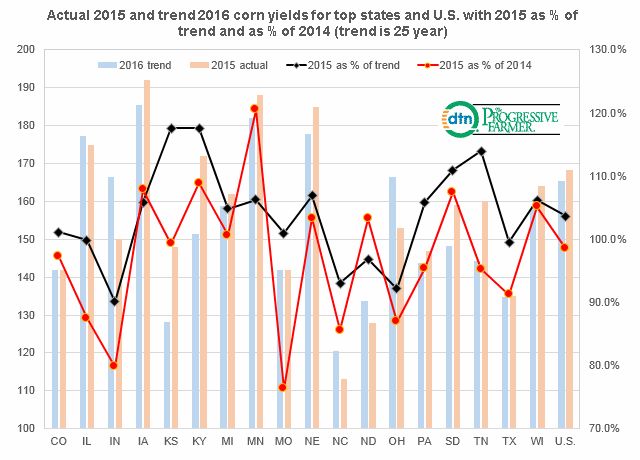 Unknown
2/4/2016 | 8:50 AM CST
It would stand to reason that growers in areas unable to produce corn yields that are sustainable both for the land and the industry might find better use for their farms. Were it not for government intrusion and infusion this might indeed be the case. Heck , we might even develop new crops and cropping systems if we could wean our industry away from the government's involvement. This situation is the pink elephant that sits in every agriculture discussion I attend or read.
Raymond Simpkins
1/16/2016 | 6:51 PM CST
And Marcia said that Iowa producers on average still lost $86.00 an acre with 192 bu yields. Gives everyone something to look forward to for 2016 doesn't it?