In recent years protein prices have been relatively strong compared to energy prices in most feed rations.

Protein prices are usually tracked by soybean meal values while corn serves as the proxy for estimating net energy costs.

The accompanying graphic is the long-term soybean meal/corn ratio on a per ton basis with the average ratio and the plus and minus one and two standard deviation lines.

Fifteen months ago the ratio was at one of its highest points ever due to one of the tightest soybean stock to use ratios in history vs. relatively ample supplies of corn.

Now the situation is reversed with the current soybean stock and stock to use ratios the highest in nine years while crush margins have plummeted based on a drop in soybean meal prices linked to a dramatic slowdown in export demand amid a high valued U.S. dollar and ample product from South America.

Plummeting livestock margins and well above temperatures in the main U.S. feeding areas so far this fall has also weighed on domestic offtake.

As consequence the SBM/corn ratio has fallen below the long-term average of 2.16 and looks headed down to the negative one standard deviation mark of 1.75. 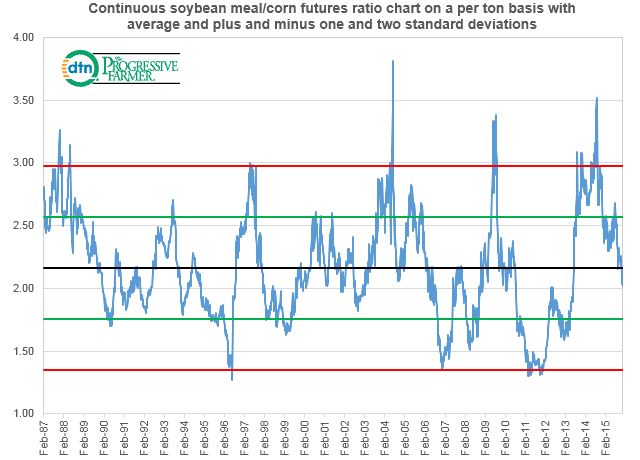 Freeport IL
12/27/2015 | 8:17 PM CST
There looks to be a 20%% to 35% chance of seeing double digit prices for soybeans in our 2016-17 marketing year. This is for the fall of the crop we will plant this spring. This outlook is factoring a 2% drop in Brazil's production from USDA's current estimate. This is for the crop they are currently growing. The range in projected chance is dependent on Argentina's crush and export activities and 85 million or less soybeans are planted in the US this spring. "Funny" SBM/corn ratios may indicate Argentina's intentions. Happy Year! Freeport, IL