On Jan. 20, Agriculture and Agri-Food Canada's Outlook for Principal Field Crops report will be released which will include the addition of supply and demand forecasts for Canada's principal field crops for the 2023-24 crop year.

This study looks at the past success of this report in estimating one component of this data, or production, for the upcoming crop year.

The blue bars on the attached chart indicate the percent change from AAFC's initial forecast in January to the final estimates reported by Statistics Canada, which includes any revisions that may have been reported.

The extremes shown on the attached chart for the 2022-23 crop year (blue bars) range are seen in the flax and oat estimates, which compares the change from the Jan. 21, 2022 AAFC estimate to the November estimate released by Statistics Canada on Dec. 2, which is subject to revision for a two-year period. The final oat production estimate is 19.9% higher than the January forecast with the final estimate showing higher seeded acre, harvested acre and average yield. The final flax estimate released in December was 18.4% below the January estimate, with a significant drop in seeded acres off-setting a higher yield estimated in January.

The brown bars represent the five-year average percent change from January to December, results that are significantly affected by the 2021 estimates that saw final estimates as much as 51.8% below the January estimate across the crops selected, which was the case for durum. 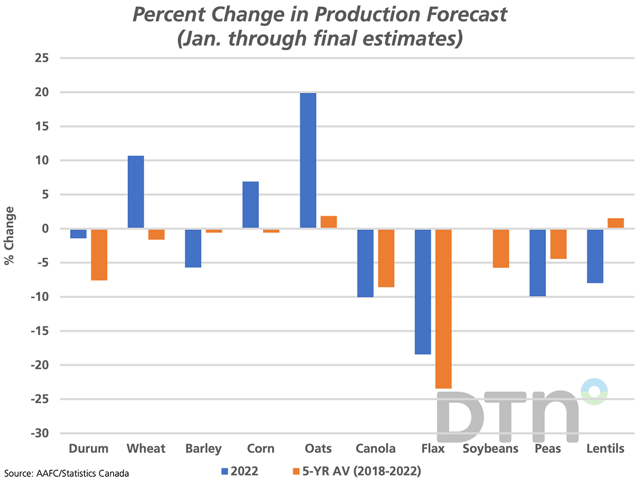