A combination of significantly higher crop year supplies, high quality and Canada's weaker dollar against the U.S. dollar has proved supportive for wheat exports. At the same time, hopes are for improvements in rail service over the balance of the crop year.

When Agriculture and Agri-Food Canada released its first estimates for 2022-23 in January of 2022, wheat exports (excluding durum) were pegged at 17 million metric tons (mmt), although this was well in advance of spring planting. Since this estimate was released, the wheat export forecast has been revised higher eight times, including the past four months (Sept-Dec), with exports estimated at 18.9 mmt in the December Outlook for Principal Field Crops.

As of week 23, or the week ending Jan. 8, 8.5853 mmt of grain has been shipped through licensed terminals, as found in the week 23 Grain Statistics Weekly released by the Canadian Grain Commission. This is second only to the 2020-21 volume of 8.9 mmt shipped during the first 23 weeks, which led to record exports of 20.6 mmt. Note that in 2020-21, all-wheat exports reached a record 26.3 mmt, a volume that includes not only shipments through licensed terminals, but also unlicensed exports and the export of products such as flour, in addition to durum exports.

It is interesting to note that this projected volume added to AAFC's durum export forecast of 4.8 mmt would lead to all-wheat exports of 26 mmt, just shy of the 2020-21 record. The 26 mmt would equal the USDA's forecast for Canadian all-wheat exports, an opinion they have held since the August World Agricultural Supply and Demand Estimates (WASDE) report.

Week 23 data shows commercial stocks of 2.8122 mmt of wheat (excluding durum), up 11.9% from the same week last year and 3.2% higher than the five-year average, the highest volume reported in four years. Of this volume reported, 50% is found in-store terminal positions, the highest percentage reported in five years and compares to the five-year average of 44.2%. Shippers are well positioned to maintain the current pace of exports. 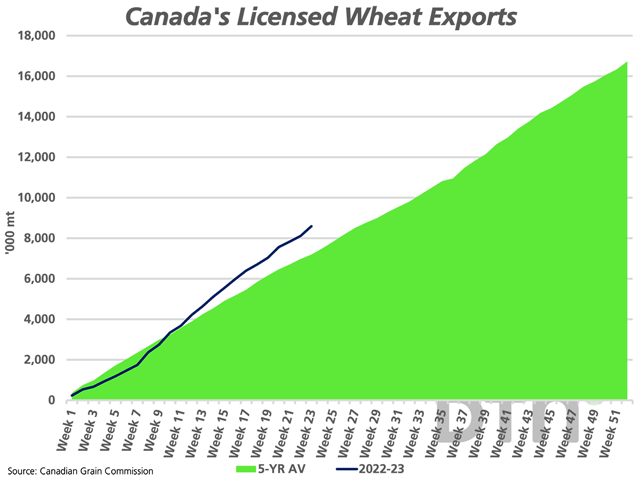