As we head into the fall, one notable weather pattern has been the inconsistent precipitation across much of the central United States during the growing season. If your operation is anything like my family's farm in southwest Minnesota, one field will get measurable, more consistent rainfall while the next field down the road stays drier. Outside of the inconsistent rainfalls across the U.S., stronger storms have also made the headlines this summer as they've torn through portions of the Corn Belt.

One type of storm that's made the headlines is a derecho. Derechos can pose a threat to maturing crops; therefore, I would like to dive into a brief meteorology lesson on what exactly a derecho is and highlight three derechos that have affected farming operations across the Great Plains and the Corn Belt during the summer.

One of the first things you may think of when you hear or see the word "derecho" could be strong winds. You would certainly be on track with this mentality. But to be more precise, the Storm Prediction Center defines a derecho as "a widespread, long-lived windstorm" that will have a path of wind damage that extends at least 400 miles in length, is at least 60 miles wide, and includes severe wind gusts of at least 58 miles per hour along the majority of the storm's length. In addition to these qualifications, the storm must contain more dispersed wind gusts of 75 mph or greater.

Now that a derecho has been defined, how do derechos form in the first place? First, a cluster of thunderstorms must develop. Surrounding this thunderstorm cluster, unidirectional wind shear must be present while wind speed needs to be increasing throughout the height of the atmosphere. Unidirectional wind shear means that the winds must be blowing in the same direction throughout the height of the atmosphere.

Now, going back to the thunderstorm cluster, localized areas of sinking, rain-cooled air need to be reaching the surface. As areas of localized sinking air hit the earth's surface, it will spread out and force warmer and moister air to the front edge of the cluster of storms. This action of cooler, sinking air forcing warmer and more moist air to the leading edge of storms can lend to the formation of a gust front.

The development of a gust front is crucial to getting a derecho to form. A gust front will collide with warmer and moister air out ahead of it which lends to further development of new thunderstorms. Additional storm development will continue creating more sinking, rain-cooled air which will contribute to strengthening the gust front.

Eventually the sinking, rain-cooled air accumulates enough near the surface to force the gust front to take on a bow shape. The bow shape is crucial for causing the gust front to accelerate forward. At this point of a derecho's evolution, it will contain a narrow band of heavy rain along with severe wind gusts at the front edge of the storm. Knowing that warm, moist air out ahead of the gust front is vital to the storm's evolution, a derecho will begin to dissipate in strength as it loses access to warm, moist air.

Another notable characteristic of derechos is that they will most often occur during summer -- May, June, and July -- across the central U.S. These months will typically favor more widespread heat and humidity for a derecho to form. Likewise, the Northern Plains and the Corn Belt have seen a few derechos this summer. Starting on May 12, a cluster of storms strengthened in eastern Nebraska that eventually formed into a derecho. This derecho headed northeast, hitting portions of eastern South Dakota, northwest Iowa, and Minnesota. Numerous wind gust reports along the derecho's path ranged from 50 to 70 mph, but there were more rare instances of even higher wind gusts. For example, the Madison, Minnesota, airport reported a gust up to 94 mph. While winds were certainly an issue with this storm, hail and tornadoes were also reported. One fortunate aspect of this derecho included that the crops were either just emerging or in the process of being planted at the time that the storm hit. In a way, the late planting season helped farmers in these areas dodge a bullet. (See story about it at https://www.dtnpf.com/…).

A month later, multiple clusters of storms formed across portions of the Great Lakes and Ohio River Valley later in the day on June 13 with storms persisting through early June 14. One of these clusters of storms survived long enough and had wind gust reports exceeding 58 mph to evolve and be classified as a derecho. While wind gust reports were more sporadic with this derecho as compared to the May 12 instance, there were multiple reports of wind damage to building structures and trees.

One of the highest gusts reported with this early June derecho was near Fort Wayne, Indiana, where the international airport reported a gust up to 98 mph. However, looking at the timing of this derecho, much of the corn and soybean crop were already emerged and in the early stage of vegetative growth. So even while the corn and soybeans were mostly emerged in these areas during the passage of this derecho, being in the early part of the vegetative stage was key. These plants were still fairly flexible at this point as compared to later points in the vegetative stage when plants are preparing to head into the reproductive stage. Again, this derecho tore through at a more convenient time for crop producers to avoid significant and widespread crop damage.

One other derecho to note moved through the Northern Plains and Upper Midwest July 5 through early July 6. Starting out as a cluster of storms across northwest South Dakota, the cluster evolved into a derecho as it moved southeast towards southwest Minnesota, northwest Iowa and northeast Nebraska. Eventually it dissipated across the eastern half of Iowa early July 6. Severe wind gusts and wind damage were again the main aspect of this storm, with some of the strongest winds reported in eastern South Dakota. A wind gust up to 99 mph was reported near Miner, South Dakota.

However, on top of the severe wind gusts, the derecho dumped hail onto portions of South Dakota, southwestern Minnesota, and northern Iowa. Some crop producers in these areas were a bit less fortunate to dodge the impacts of severe weather on their crops. Although the damage caused by this derecho was isolated, the row crops across these states were further into the vegetative stage at this point. There were isolated areas of straight-line wind damage and pockets of hail left their mark on the maturing crops. While the May 12 and June 13 derechos occurred early enough to avoid widespread harm, this July 5 derecho certainly provided some isolated cases of negative impacts to row crop yields. (See more on that derecho at https://www.dtnpf.com/…).

As we start to make the transition from summer to fall here across the central U.S., many row crops are in the critical reproductive and fill stages. A derecho accompanied by severe wind gusts, hail, and even a tornado, would mean almost a certain hit to yields at this point in the growing season.

Even if derechos may be most common during May, June and July, we cannot forget that they can indeed happen outside of these months. The August 2020 derecho that ripped through Iowa and Illinois is a reminder of this. (See DTN's full coverage of the impact of that 2020 derecho at https://spotlights.dtnpf.com/…).

Therefore, looking at the rest of the growing season we have out ahead of us, the timely rains will be crucial, but we'll need to be cognizant of the threat for severe weather and its impacts on crops up until harvest.

You can find more information about derechos here: https://www.spc.noaa.gov/…

To see tips on how to prepare for extreme weather such as derechos, see https://www.dtnpf.com/….

Teresa Deutchman can be reached at teresa.deutchman@dtn.com 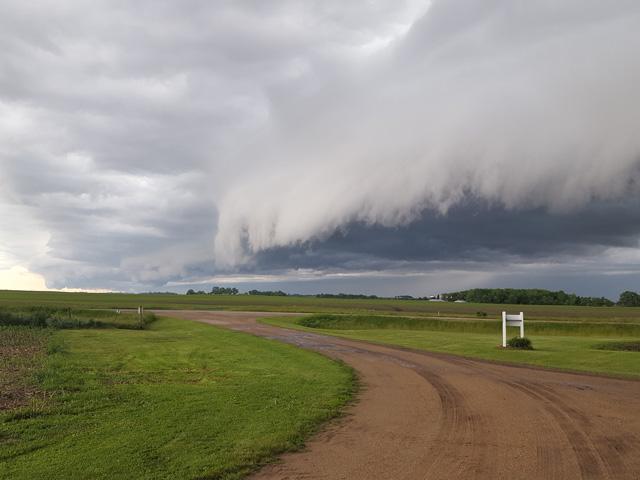