At least two people were killed by the storms.

Crop damage may have been minimal so early in the planting season, but farms saw significant damage to buildings and equipment.

Social media was filled with images of damaged buildings, crushed grain bins and twisted irrigation pivots, as well as videos of the straight-line winds and dust rapidly approaching and hitting across the region.

A cluster of rapidly strengthening thunderstorms developed in eastern Nebraska Thursday afternoon that dropped strong wind gusts to the ground as it moved quickly to the northeast through eastern South Dakota, northwest Iowa, and southwest Minnesota through Thursday evening, according to DTN Ag Meteorologist John Baranick.

Baranick noted more than 50 reports of gusts measuring more than 74 miles per hour and a couple exceeded 100 mph. With plenty of topsoil exposed from delayed planting this spring, the strong winds produced a dust storm across the area which is known as a "haboob." The damage extended for more than 300 miles, which will meet the classification as a derecho, though the damage path was more narrow than some of the other derechos that have moved through during the last few years.

The Minneapolis Star-Tribune reported one fatality in Kandiyohi County, Minnesota, in the south-central part of the state as a grain bin was toppled and fell on a car. At least one other fatality was reported in Sioux Falls, South Dakota, when debris came through a window of a car.

South Dakota officials, in a morning press briefing, noted metal buildings and grain bins were down across southeastern parts of the state and winds reached 105 mph.

Jim Miller, a farmer from northeast Nebraska, told Brownfield radio he was planting when a wall of dust closed in on him. "I turned the lights on the tractor and I couldn't see 20 feet in front of the tractor. I've never seen a dust storm blow in like that before. It made the whole tractor rock. I was kind of worried that I was in a tornado even," Miller told Brownfield.

National Weather Service highlight of high winds and tornadoes from Thursday's storm can be seen at: https://www.weather.gov/…

Image of communities south of Sioux Falls where a series of grain bins were toppled and crushed: https://twitter.com/… 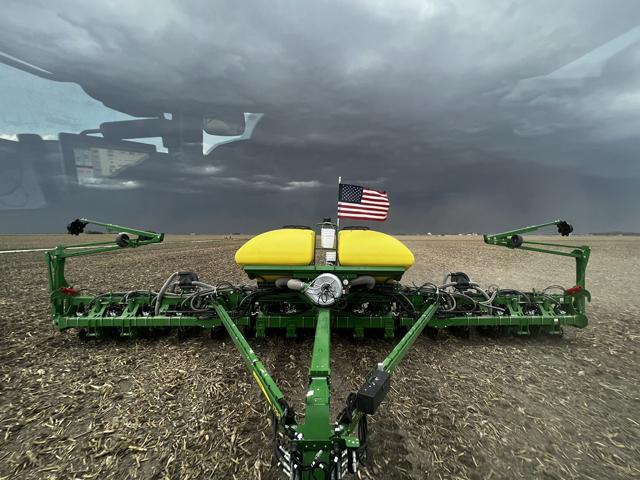