A bill in the Iowa Legislature that would have halted the possibility of carbon pipelines using eminent domain has failed to advance in the Iowa Senate, effectively killing the bill before a Friday legislative deadline.

As DTN had reported on Feb. 15, the bill was one of moves taking place as proposed carbon pipelines are facing more organized resistance in Midwest states. (https://www.dtnpf.com/…)

The Iowa bill had advanced through a subcommittee on Tuesday, but didn't get brought up in a full committee, according to media reports. Without advancing out of committee, the bill won't move through the "funnel week" in the Iowa Legislature.

"There was enough opposition that the bill was killed before it had a public vote with the full committee," Sen. Jeff Taylor, author of the bill, told the Iowa Capital Dispatch. The northwest Iowa state senator added, "I don't have a lot of optimism that we're going to be able to pass legislation. I don't think there's the political will in either chamber to stop the use of eminent domain for these pipelines."

Separately in the Iowa Legislature, a bill that would prevent commercial solar operations to be built on higher-quality farm ground did advance through the Senate Agriculture Committee.

A week after Nebraska Gov. Pete Ricketts' canal project drew mostly support at a hearing in the Nebraska Legislature, the project is getting a little more scrutiny from lawmakers.

As reported by DTN, Ricketts is proposing to spend at least $500 million for a canal project starting in Colorado along the South Platte River. The Perkins County Canal project has its roots going back to the 1890s when drought-stricken Nebraska farmers tried to start the canal on their own. A 1923 water compact between Nebraska and Colorado left the door open for Nebraska officials to pursue a canal at a later date. Ricketts is proposing the canal to preserve water flows from Colorado, citing the estimated $10 billion in water projects proposed in Colorado largely to ensure water supply to its growing front-range communities. (https://www.dtnpf.com/…)

At a hearing on Feb. 9, Ricketts told lawmakers, "After our people, water is our greatest natural resource," pointing to 9 million acres of irrigated farmland in the state. "Colorado has mined their Ogallala aquifer," he said, adding "Colorado is looking to take our water."

Officials said it would take up to three years to lay out and design the canal and up to seven years to build it. To make the canal effectively operate, the state would also need to recreate a reservoir system in western Nebraska to hold water.

Still, the Nebraska Examiner reported this week that the chairman of the Nebraska Unicameral Appropriations Committee said he can't agree with setting aside $500 million for the canal. The plan calls for Nebraska to use $400 million in cash reserves and $100 million from the American Rescue Plan.

"This canal is a complicated, long-term project that deserves to be looked at," said State Sen. John Stinner of Gering, Nebraska.

Meanwhile, Ricketts has been holding town halls across the state during the past week about "water and taxes" to discuss his legislative priorities, including the importance of protecting water flows on the South Platte River into the state. Ricketts was scheduled to hold three such events in eastern Nebraska cities on Friday. 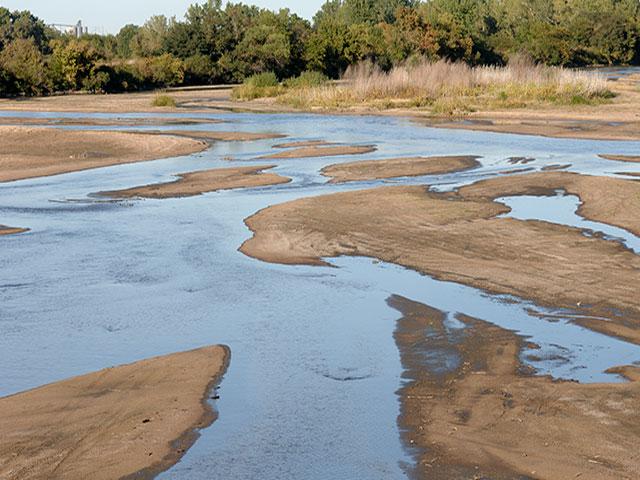