But he added, "At USDA, we are laser-focused on making sure that every farmer, rancher, and producer of food, fuel and fiber can access the needed crop insurance tools to manage their operating risk."

That's a reflection of the Biden administration's determination to provide crop insurance to underserved farmers, particularly minorities, and for a greater variety of crops, he said. But Vilsack spent most of the video noting the importance of crop insurance to all farmers.

Vilsack, who served as Agriculture secretary for eight years under President Barack Obama, said that throughout his time at USDA he has seen "all manner of disasters."

He said the farmers, ranchers, and producers who had crop insurance told him it gave them the confidence to rebuild and make it to the next growing season.

"They knew that one bad year, one lost crop, wouldn't mean losing the family farm or ranch that had been in the family for generations because they had that insurance product, that didn't necessarily make them whole, but did keep them in the game," he said.

"America's farm safety net is the envy of the world, and partnership with crop insurance is a key component," Vilsack added.

Joe Outlaw, the Texas A&M agricultural economics professor who also consults with the congressional Agriculture committees, acknowledged here Tuesday that he is analyzing possible disaster programs for inclusion in the 2023 farm bill.

Asked by DTN after he gave a speech to the Crop Insurance Industry Annual Convention here what he thinks about a permanent disaster program, Outlaw said he could not answer that question because he is analyzing such proposals.

Asked whether he is undertaking that analysis as an academic or for Congress, he added: "Both."

In a wide-ranging speech, Outlaw also said that commodity prices are so high that Congress is unlikely to spend much money on farm subsidies this year, which will mean that the baseline of spending for the 2023 farm bill will be low.

But Outlaw said he doesn't think current commodity prices will stay as high as they are now and would plummet if exports go down.

Noting that input costs "have gone up across the board," Outlaw said that his research shows that companies raise input prices when corn prices go up. Although farmers criticize companies for raising input prices when crop prices go up, Outlaw said that the companies may also hold off increases when crop prices are lower and then figure that when prices are high, "it's a good time to do it."

Because the companies tend to raise input prices if the price of corn -- the nation's biggest crop by acreage -- goes up, farmers with other crops that are not experiencing the price increase, such as rice, find themselves having to pay higher input prices even though they haven't benefited from the price rise.

Outlaw noted that some farmers are calling for increases in the reference prices that trigger farm subsidy payments, but questioned where Congress would find the money to pay for it. He noted that the current reference prices were created by the 2014 farm bill using 2012 costs.

Of proposals to update base acres, Outlaw said that idea would face problems at the World Trade Organization, which says that farm subsidies should get paid on historic acreage, but that the bigger issue is that registering more acres for producing soybeans would raise subsidy expenses.

With commodity prices so high, Title I payments are unlikely to be triggered for most crops, Outlaw said. "Crop insurance is way, way more important than before," he added.

The Build Back Better bill conservation provisions would double conservation spending, but that bill is stalled in Congress, Outlaw noted. The advantage of those provisions is that farmers would be paid to plant cover crops, he added. Outlaw said he believes some form of the BBB may be revived because this would be President Joe Biden's "legacy."

Companies are trying to convince farmers to sign up to be paid for carbon credits, but Outlaw urged the farmers to wait to sign up until congressional action is clearer.

Outlaw said he is particularly intrigued by the provision in the Biden administration's new Partnerships for Climate-Smart Commodities that will include developing markets for those commodities.

He also noted that, while the Midwest can grow the cover crops that could lead to a farmer's corn or bean crop being certified as climate-smart, other parts of the country do not have enough moisture to grow two crops per year.

Asked if a system could be developed to certify climate-smart commodities based on different standards in different parts of the country, Outlaw said that whenever there is an attempt to have a policy that is not national, some people feel disadvantaged.

Speaking of the farm bill, Outlaw asked, "How do you make people happy with less money? You don't, you stay with what you have." He predicted a farm bill "that looks much like what we have." 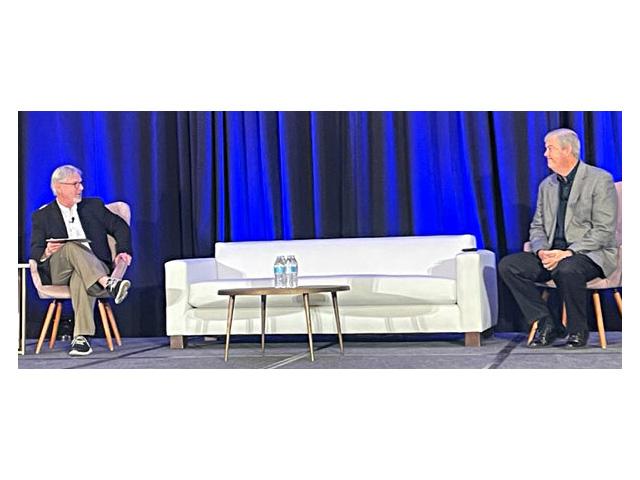