An Iowa state senator's bill would take away the companies' ability to use eminent domain. The bill introduced by state Sen. Jeff Taylor, a Republican from northwest Iowa, would limit the use of eminent domain to public utilities and double the annual fee paid to the state for pipelines carrying hazardous liquids.

"I've heard from lots of farmers back home, in northwest Iowa, who are upset about the pipelines and about the likely use of eminent domain to seize part of their land -- or, to put it another way, to coerce an easement," Taylor stated Monday in an email to DTN. "Some object to the pipelines for safety reasons, some because crop yields will decrease as a result of topsoil disturbance, and others just don't want to have a hazardous liquid pipeline forced upon them. Three of the four county boards of supervisors in my district have registered opposition to the use of eminent domain for these pipelines with the Iowa Utilities Board."

Iowa is the center of three separate carbon pipeline projects that collectively would cross about 1,600 miles of property just in the Hawkeye state alone.

Summit Carbon Solutions is led by Bruce Rastetter, an Iowa agribusiness leader who has owned and operated pork and ethanol companies in the state. Summit's Midwest Carbon Express pipeline, estimated to cost $4.5 billion, plans to run through Iowa, Minnesota, Nebraska and South Dakota and sink carbon dioxide into a geological formation in North Dakota about a mile into the ground.

In Iowa, Summit Carbon Solutions filed an application with the Iowa Utilities Board in late January to use eminent domain for its pipeline across 30 counties. The company will be building at least 681 miles of pipeline just in Iowa. In its application, Summit stated, "It is uncertain whether and to what extent the right of eminent domain will be required."

Summit, though, has stated the company already has signed up hundreds of landowners and cites strong support for its project. "This project will be transformational for the ethanol industry and, by extension, the agriculture industry," Summit stated.

"We're pleased to have begun the permitting process for Summit Carbon Solutions, which keeps us on schedule to be operational in the first half of 2024," said Rastetter, CEO of Summit Agricultural Group, in a statement earlier this month. "Farmers and landowners in Iowa understand that ethanol production consumes over 50% of our corn crop every year, which is a big reason why we've had early success signing hundreds of pipeline easements with farmers who have a vested interest in our success."

Summit announced last week the company also filed for a permit with the South Dakota Public Utilities Commission for nearly 459 miles of planned pipeline routes in that state. Summit officials have expressed confidence they would be able to use eminent domain in that state, if necessary.

Summit and backers have continued to highlight the benefits that could come from lower emissions at ethanol plants, which would improve the prospects for selling ethanol that demonstrates lower carbon intensity.

"Summit Carbon Solutions' project will benefit farmers across the state by maintaining a strong corn market while supporting ethanol producers. The project will also provide tax revenue for the counties along the route and help the environment," said Walt Wendland, CEO of Ringneck Energy, one ethanol plant partnering with Summit in South Dakota.

So far, Summit's main competitor, Navigator CO2 Ventures, has not filed for eminent domain. Created by the Texas-based pipeline company Navigator Energy Services, Navigator's Heartland Greenway pipeline, projected at $2 billion in costs, will stretch 1,200 miles across Nebraska, South Dakota, Minnesota, Iowa and sink its carbon dioxide at two sites in Illinois near where ADM is already sinking carbon into the ground near Decatur.

ADM also has announced plans with Wolf Carbon Solutions for another pipeline from Cedar Rapids, Iowa, to where ADM is already sequestering carbon near Decatur, Illinois.

Taylor noted the Iowa Farm Bureau Federation has not taken a position on the pipelines or on eminent domain for private companies. "But I've heard considerable agreement with my position when speaking to county Farm Bureau boards during the past couple months," he stated.

One of the more conservative state senators in Iowa, Taylor noted he has had senators from both parties express support for his bill. He added, "On the other hand, the bill is considered 'controversial' -- not because grassroots Iowans or conservative Republicans oppose it, but because one of the pipeline companies is politically well connected in Iowa and there's big money behind all three companies."

Jessica Mazour, a coordinator for the Iowa Sierra Club, told DTN on Monday she had just found out that Taylor's bill would get a subcommittee hearing at the Iowa State Capitol on Tuesday. She was organizing landowners who could make it to Des Moines to attend the hearing. Mazour said there is an inherent unfairness about a private company using eminent domain to make a profit at the expense of someone else's right to their land.

Besides private citizens, at least 20 county boards of supervisors also have filed formal objections to the use of eminent domain for the project.

ACTIONS IN OTHER STATES

While Iowa, South Dakota and North Dakota have specific permitting requirements for carbon pipelines, that isn't the case in some other states. Nebraska has no state law governing carbon pipelines. The Minneapolis Star-Tribune reported last week that the Minnesota Public Service Commission has determined that carbon pipelines are essentially regulated by county zoning laws.

Nebraska, though, has a lot of recent history opposing pipelines. Earlier this month, the group Bold Nebraska held a couple of in-person events and an online informational meeting about landowner rights. Of Nebraska's 24 ethanol plants, at least nine have committed to the Summit pipeline while three have signed on to Navigator.

"Pipeline companies have a playbook. We didn't know that playbook 12 years ago. We know it now," said Jane Kleeb, founder of Bold Nebraska.

Brian Jorde, an attorney with the Domina Law Firm in Omaha, also helps lead the Nebraska Easement Action Team (NEAT) to represent landowners in negotiations with pipelines. That work has since crossed over into Iowa where NEAT is representing dozens of landowners as well.

"You are not being protected at the state level," Jorde told landowners at a meeting in York, Nebraska.

"It's going to be a battle over whether they have a mechanism to use the power of eminent domain," Jorde said.

Jorde noted easements are perpetual and he's represented landowners in at least one case in which a property heir hit an oil pipeline with farm equipment because he didn't know it was there. The pipeline then sued the landowner trying to recover damages. These types of issues need to be negotiated ahead of time, especially since landowners often only receive one payment. Then there is the question of what happens to the pipeline once its useful life has ended.

"With just a few little words, they can shift risk," Jorde said. A negotiation with a large group of landowners can ensure liability gets pushed back onto the pipeline company.

A key part of the focus for NEAT is to spread the costs of attorney representation because NEAT will negotiate on behalf of all the landowners with a pipeline company to force better easement terms.

"If you don't stand up for yourself, you aren't going to be protected," Jorde said. He added, "Everyone I've ever represented, those who hold out the longest get the most money." 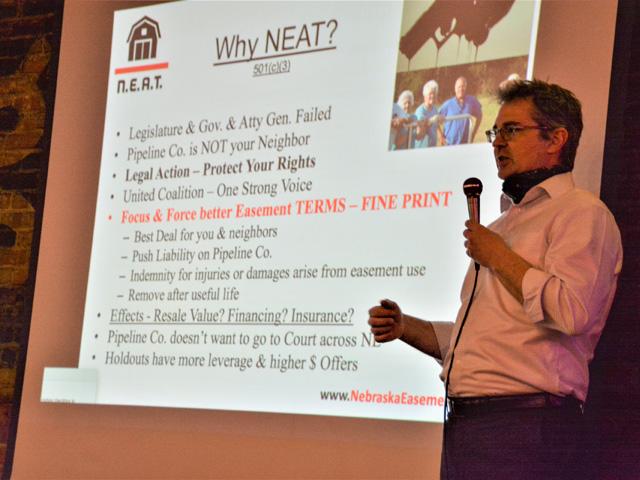