While changes in the policy book offered a lot of technical changes in some areas, the special orders coming out of the convention pointed to problems with production and trade challenges of 2019 that are carrying over into 2020, as well as a need to spotlight on the elections this year as well.

Among some of the special order recommendations passed by delegates were calls to add quality adjustment factors as an option for crop insurance, as well as develop and adequately fund a permanent disaster program rather than rely on ad-hoc aid. The special order also calls on lenders, including the Farm Service Agency, to address cash-flow deficits in operating loans this year, and NFU wants the federal government to provide a more transparent process for trade aid or disaster programs.

"A lot of that really centers on bringing some sort of certainty," Larew said. "We have all the uncertainty that farmers are facing on a regular basis that will always be there, but on top of that you have a lot of manmade challenges, a lack of certainty on whether there will be assistance from the government and the shape it will take, and quite frankly the lack of action in the climate space. All of these things contribute to the risk that farmers are facing from natural causes."

When a reporter highlighted the call to revive a permanent disaster program, Larew said, "Again, I think the theme there is certainty, whether it is trade disaster -- economic disaster -- will there be something, what will it look like, what will the terms be?"

Among the longest debates in the convention, delegates voted 55-125 to reject a policy change that would require all NFU voting delegates to meet USDA's definition of actively engaged in farm production. Just before ending the policy debate, delegates also rejected a special order supporting a "Family Farmer's Bill of Rights," with skeptics raising questions or concerns that such a measure could actually open the door for more corporate, investor-owned farming operations.

"The discussion that they had really centered on how we can have the most effective and the loudest voice possible to get our shared values and our shared priorities out there," Larew said. "I think that conversation and that debate will always be there. I think it's very healthy for the organization to do that, and I think collectively folks remain aware that we are going to need a broad coalition of very diverse interests, whether they are delegates or members or otherwise."

NFU has consistently called for a different formula for the MFP payment and Larew picked up on the theme from his predecessor, Roger Johnson, calling on USDA to work with Congress to develop any new trade aid rather than create their own program again using Commodity Credit Corp. funds.

"This go-it-alone approach that USDA has taken, that the administration has taken in issuing these payments and setting the terms for them is, quite frankly, not respectful to the legislative branch and I think they need to be involving them," Larew said. "These payments are going to have a very real, direct impact on any future action Congress takes, whether it is a farm bill or some other future thing, and particularly since these started right on the heels of the last farm bill, I don't think it makes much sense" to not include Congress.

On the long-standing issue of corporate consolidation, Larew said more conversations are taking place on the campaign trail. He encouraged Farmers Union members to take advantage of campaign forums to raise the issue. "They will certainly be talking about the impact it has on rural communities," Larew said. He also said more attention to consolidation is happening in technology, and anytime another industry is spotlighted with this issue, that's also an opportunity for agriculture to weigh in as well.

Among the special orders passed was one calling for "truth in labeling and promotion of meat products." NFU supports using terms such as "beef, pork, poultry, lamb and seafood in a food label to be used exclusively for meat harvested from live animals, in a traditional manner."

Among other resolution changes were:

-A call for more oversight by the Commodity Futures Trading Commission on local basis levels, stating that basis should reflect the cost of transportation and storage from the point of local delivery to the point of terminal delivery, "and it is not to be used as a risk mitigation tool for the grain merchandiser.

-More focus on anti-trust legislation and oversight, including concentration on energy and control of energy sources. Also, Farmers Union wants federal agencies to recognize the upstream effects of mergers and anti-competitive behavior on farmers and farm labor. -

-NFU also spelled out it opposes moving any federal agency out of Washington, D.C., without the consent of Congress.

-NFU wants to restrict all forms of direct and indirect ownership or control of agricultural products by agribusinesses, including the prohibition of ownership, control and operation of milk production facilities by dairy processing companies.

-Require a majority of life-saving drugs to protect public health be manufactured within federal guidelines and no other country produces more than 50% of one drug for our country.

-Call on the federal government to develop and improve non-immigrant visa programs, including H-2A, to help the agricultural community by allowing a more flexible, cost-effective and reliable visa program. The program should control the growth of the Adverse Effect Rage rate, which has generated an unsustainable increase in farmers' labor costs, the amendment stated. The guest-worker program should also allow for year-round labor needs. 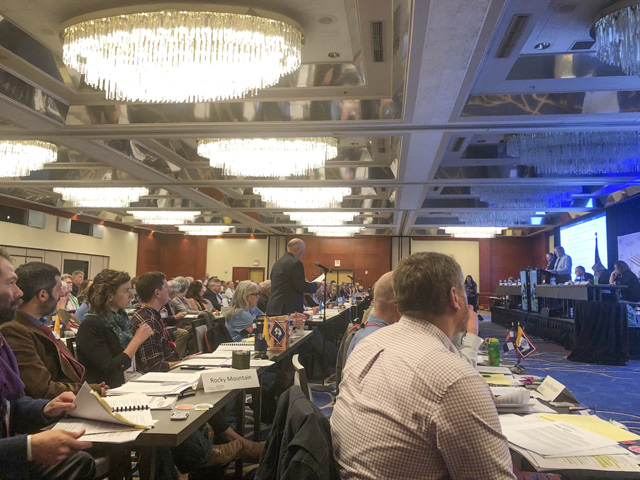