Eight senators from states bordering the Missouri River below the dams introduced legislation Thursday that would require the U.S. Army Corps of Engineers to reduce the risk of floods and improve protections on the lower Missouri River.

The legislation comes almost a year after a "cyclone bomb" and rapid snow melt caused billions of dollars in flood damage in Iowa, Missouri and Nebraska with levee and other infrastructure repairs still underway. The Corps so far has spent more than $263 million on levee repairs alone.

Officials and some residents along the Missouri River blame the historic flooding, and repeat from 2011 flooding, as being caused by the Corps other Missouri River priorities, including protection of endangered species and recovery of wildlife habitat.

“After the historic flooding we saw over last spring and in previous years, it is clear that we need to fundamentally change the way the Missouri River is managed. Farmers, families, and local officials I’ve talked to are rightly concerned with the lack of progress that has been made in repairing damaged infrastructure and putting stronger protections in place for the future. We can’t just sit by and wait for the next major flood event. This bill will give the Army Corps of Engineers the ability to develop a comprehensive system plan to design and build critical flood control projects that will do a better job of protecting people and property,” said Sen. Roy Blunt, R-Mo.

Sen. Charles Grassley, R-Iowa, added he had heard from Iowans about how the historic flooding was having a devastating impact in their communities. "It’s important that we learn from those experiences and do what we can to protect against and prevent future flooding. This bill will empower the Army Corps of Engineers to work with stakeholders along the Lower Missouri River to more seamlessly implement projects through the study, design and construction phases,” Grassley said.

The Corps last month proposed $400,000 in funding for a study of the lower Missouri to improve flood protection and detail recommendations for mitigation at different locations. Governors in lower Missouri River states had signed a letter of intent to help fund the study. https://www.dtnpf.com/…

Forecasters are warning the region is at risk for flooding again this spring as water runoff from the Dakotas remains high. The Corps just Thursday lowered releases from Gavins Point, S.D., down 3,000 cubic feet per second to 38,000 cfs. The high volume of water releases have continued all winter and are more than double the normal winter volumes.

The bill would streamline how the Corps plans and manages Missouri River development projects, and would require the Secretary of the Army to work with flood-affected communities on water-resource projects on 735 miles of the river from Sioux City, Iowa, to the mouth of the river near St. Louis.

Senators stated the Army Secretary would be required "to develop a system plan for reducing flood risk and improving flood resiliency." The Corps would have more authority to speed up studies and planning for projects costing $75 million or less. Projects over that amount would require congressional authority. And the federal cost-share for the water-infrastructure and flood resiliency projects would be 80%. For such projects, the Corps would be required to consult with state and federal agencies, as well as tribes and other stakeholders. 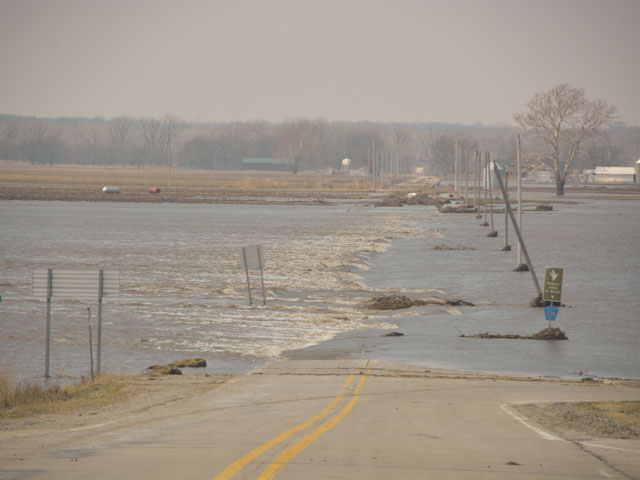