SAVANNAH, Ga., (DTN) -- In his last speech before turning over the reins of National Farmers Union to an incoming president, Roger Johnson warned farmers to watch out for what happens to farm income and trade when Market Facilitation Program payments end.

NFU officially kicked off its annual meeting Sunday in Savannah.

Johnson, who has served as president since 2009, cautioned in a speech early Sunday evening discussing changes in National Farmers Union since he became president. In talking about some of his concerns going forward, Johnson said he thinks farmers will see another round of MFP payments this year, even though Secretary of Agriculture Sonny Perdue has tried to tamp down that talk.

"We're going to get another MFP because it's an election year," Johnson said. "Even the president said it here a week or so ago -- a day or two after the secretary (of Agriculture) said it wouldn't happen. Well, the president is the one in charge so the secretary is changing his tune."

Johnson makes the case that MFP payments over the past couple of years will make it harder to pass the next farm bill. He highlighted the spending cuts in farm programs before the 2014 farm bill was passed. He sees the same possible scenario playing out in 2021.

"I tell you that because there are lots of political things that go into developing a farm bill," he said. "My fear is one of the things that has happened in the last two years is we have seen action out of this White House -- created out of whole cloth -- brand new programs that were important and essential because of the difficult economic times farmers were going through. But these MFP payments were not a part of the farm bill at all."

He noted that after President Barack Obama was re-elected in 2012, Congress and the president reached a deal to cut spending, the federal budget sequestration, that put significant spending constraints on USDA spending even before passage of the 2014 farm bill. At the time of the budget sequestration, the only committees that stepped forward with cuts were the House and Senate Agriculture Committees. That significantly hampered the push to pass a farm bill.

"The other thing that was happening at that time was the markets were looking pretty good," Johnson said. "We were in the middle of a big drought so markets were trending higher."

Johnson notes the payments from the two years of MFP payments, totaling $23.24 billion according to USDA, "are swamping" the farm programs that come from the farm bill. That undercuts the compromise and five years it takes to develop a farm bill and its programs, he said.

"We've argued all along from the very first proposal that the White House should be sitting down with the House and Senate Agriculture Committees and be jointly developing how they are going to spend this money so it is done in a way that is sensitive to some of the political dynamics that it takes to pass a farm bill," Johnson said.

Johnson compared the MFP payments to the 2009 auto bailout, which ended up costing taxpayers about $11.2 billion once stock purchased by the government in General Motors was completely sold. "MFP swamped the amount of money spent on the auto bailout," Johnson said. "The point is, that's a lot of money that has gone through MFP and it is not money that we can be depending on."

Johnson said the trade aid came from a "self-inflicted wound" as the Trump administration has sought to take on China alone and seek to require China to change its form of government as part of trade. The strategy was flawed, Johnson said, because the U.S. alienated its long-time trading partners and allies rather than work with them.

"If phase one happens exactly has proposed, if that’s all and we do not get a phase two, I would argue this effort was not worthwhile," Johnson said. "Because it didn't fundamentally change the behavior of the Chinese industry or their government interconnection."

Johnson also said he thinks the U.S. has suffered serious reputational damage over the way the Trump administration has handled trade. When it comes to agriculture, "the U.S. will be a buyer of last resort" going forward for the next several years.

Three candidates on Monday afternoon will vie to replace Johnson in a delegate vote. They are dairyman Mike Eby of Pennsylvania, Donn Teske, president of the Kansas Farmers Union, and Rob Larew, NFU's senior vice president of public policy and communications. 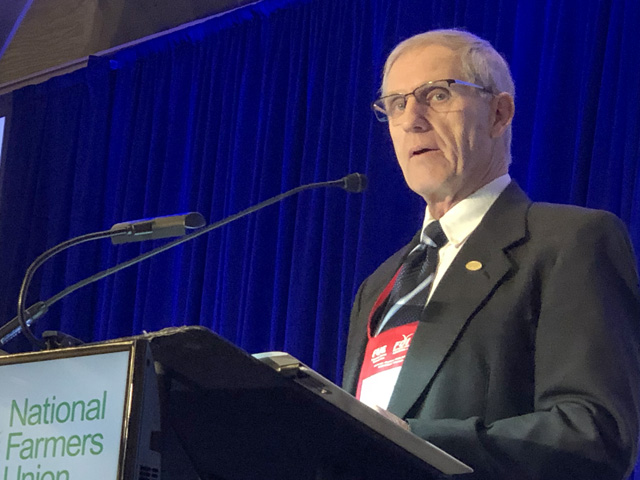