March Minneapolis wheat ended up a half-cent for the week, at $9.58 3/4 Friday, Nov. 18. The growing season is over in the Northern Hemisphere and prices have mostly stayed in a narrow, sideways trading range the past couple months. The main noticeable change since summer has been the persistent abandonment of speculators from the long side of the market, an exit that took prices to a low of $8.76 in mid-August. Since then, specs continued to liquidate and are down to holding 5,230 contracts long as of Nov. 15, the smallest long holding in over six years. With noncommercials largely washed out of the market, it is impressive prices are holding above the 100-day average at $9.49, some recognition USDA is estimating the tightest U.S. ending HRS stocks in 15 years in 2022-23. Technically, the market is well supported and a close above $10.00, if it happened, would be a bullish sign of end users having to bid up a winter market.


March KC wheat dropped 15 1/4 cents last week, ending at $9.23 3/4. Friday's close was near its lowest prices in two months, but is holding above the 100-day average at $9.18. Not only is USDA estimating the lowest U.S. ending HRW wheat stocks in nine years at 259 million bushels (mb) for 2022-23, USDA's 32% good-to-excellent crop rating for winter wheat planted this fall is the lowest in at least 20 years and most of that is due to extreme drought in HRW wheat areas. Similar to Minneapolis wheat, noncommercial longs at 38,881 as of Nov. 15 are near the lowest long holding in over seven years. Technically speaking, March KC wheat briefly challenged resistance at $10.00 earlier this fall, but fell back and are holding support above $9.00. The recent pullback looks like a normal correction and a close above the November high of $9.87 1/2, if it happened, would resume the bullish uptrend.


March Chicago wheat closed down 13 1/4 cents last week, ending Friday at $8.22, the lowest close in over two months and below the 100-day average at $8.56. Chicago wheat has shown the most bearish behavior of the three U.S. wheats lately, but it is not a fundamentally bearish market. USDA estimated 87 mb of U.S. ending SRW wheat stocks in 2022-23, the second lowest total in 15 years. Export sales commitments of SRW wheat are up 9% from a year ago, the highest percentage gain of the three wheats. Managed future funds, for some odd reason, have a bearish view of Chicago wheat and are net short 47,622 contracts, the largest short position since May of 2019 -- another time they lost their customers a lot of money. Technically speaking, March Chicago wheat found support in mid-August near $7.60 a bushel and has held roughly steady to higher since then. A close above the November high of $9.21, if it happened, would likely trigger short-covering among bearish funds. 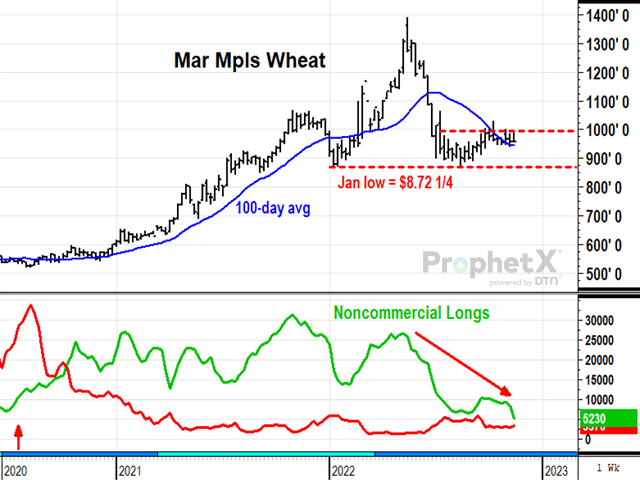