While the bullish fundamentals supporting soybean oil remain in place -- record large crush margins, increasing renewable biodesel production, which utilizes bean oil, and the spot crude oil market, which has rallied $16 per barrel -- the market may be very susceptible to some profit-taking. Momentum indicators have reached very overbought levels, suggesting a correction could soon occur. Also, managed money funds have loaded the boat on a long bean oil position, which as of Nov. 1 amounted to over 100,000 contracts -- the largest long position since March 2021. Any correction would likely be just that -- a correction in an overall bull trend. Wednesday's USDA report could also have a big impact on the soy complex and bean oil's direction. Fears of a longer recession and China's continued zero-COVID policy are two external factors that could weigh on the soy complex.


While the wheat markets have been very erratic and volatile for the last several months, wheat has maintained a positive technical outlook while U.S. and world fundamentals suggest very tight wheat supplies. As Argentine wheat production has steadily been downgraded due to drought, and Australia's heavy rain and flooding threatens the supply of quality wheat there, world major exporter supplies have continued to dwindle. Also, the U.S. Southwestern Plains have seen little relief from the extreme drought impacting much of the western hard red winter crop. Russia seems to be the lone exception to falling supplies. An important milestone will be coming in just 12 days, when the Black Sea Grain Initiative is scheduled to expire. In the event the pact is not extended, that will remove Ukraine as a wheat exporter, tightening up world supply even more. U.S. wheat exports have been dismal, but the end of the Ukraine deal would likely make U.S. exporters more competitive in the world and send wheat even higher. Expect the volatility to remain absurd until at least the Nov. 19 date.


Since early September, December corn began to trade in a sideways chart pattern, bounded by $6.60 on the downside and $7.00 on the upside. Lately, corn has tested that pattern, with Monday's breach of the 50-day moving average. Corn export demand has been abysmal as U.S. corn is offered at a monstrous premium to both Ukraine and Brazil corn. As in bean oil, managed money funds have bolstered their long bet on corn and are now reported to be net long over 261,000 contracts as of Nov. 1. With the USDA November report just ahead, anecdotal reports have corn yields registering better than expected in the latter 25% of the harvest. An upside change in yield and production, coupled with an expected decline in the U.S. corn export projection on Wednesday's report, could send corn reeling. However, on the aforementioned Nov. 19 expiry of the Ukraine deal, the failure to extend could be a boon to flagging U.S. corn demand. 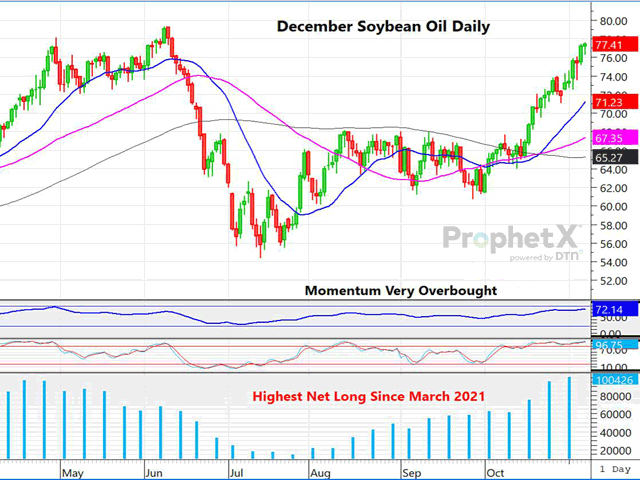