Corn (Cash): The DTN National Corn Index (NCI.X, national average cash price) closed at $3.19 1/4, down 26 1/4 cents for the week. The NCI.X abruptly rejoined its previous secondary (intermediate-term) downtrend. The sell-off is a seasonal move as cash corn remains in step with its 3-year and 10-year tendencies. Initial support is at $3.17 1/2, a price that marks the weekly closes from the week of December 5, 2016 (high) and week of March 20, 2017 (low). Weekly stochastics remain bearish.

Soybeans (Cash): The DTN National Soybean Index (NSI.X, national average cash price) closed at $8.40, down 34 1/2 cents for the week. Despite being technically oversold, cash soybeans moved back into a secondary (intermediate-term) downtrend. Support on its weekly close only chart is at the major (long-term) low weekly close of $8.08 from the week of February 22, 2016.

Soybeans (Old-crop Futures): The July contract closed at $9.04 1/2, down 34 1/2 cents for the week. Despite weekly stochastics showing the contract to already be technically oversold, July soybeans posted a bearish outside range indicating more downside is possible. As the month nears its end the contract is heavily influenced by the ongoing major (long-term) downtrend on the market's monthly chart. Next major support is at $8.44 1/4, the low from November 2015.

Soybeans (New-crop Futures): The November 2017 contract closed at $9.11, down 39 cents for the week. Similar to old-crop July, new-crop November abruptly turned bearish last week, establishing a bearish outside range on its weekly chart. Next support is at $9.01, a price that marks the 71.6% retracement level of the previous secondary uptrend from $8.57 through the high of $10.43, then the previous low. 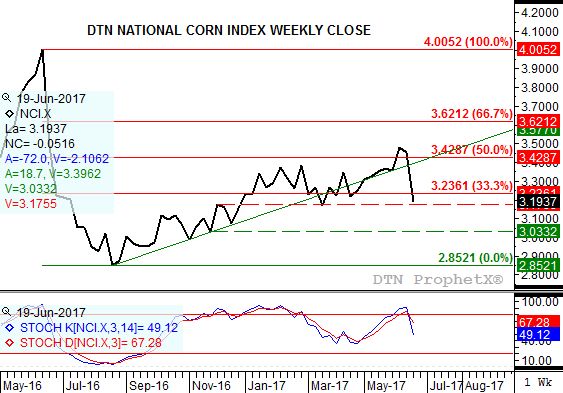