SRW Wheat (Cash): The DTN National SRW Wheat Index (SR.X, national average cash price) closed at $4.39 1/2, down 2 1/4 cents for the week. The SR.X remains in a secondary (intermediate-term) uptrend on its weekly close-only chart. The SR.X continues to test resistance at $4.42 1/4, a price that marks the 38.2% retracement level of the previous downtrend from $6.01 1/4 through the low of $3.44. Next resistance is at the 50% level of $4.72 3/4. However, weekly stochastics remain above the overbought level of 80%, possibly limiting new buying interest.

HRW Wheat (Cash): The DTN National HRW Wheat Index (HW.X, national average cash price) closed at $4.03 1/2 down 4 cents for the week. While cash HRW remains in a major (long-term) uptrend, indications are its secondary (intermediate-term) uptrend may be running out of momentum. Weekly stochastics are above the overbought level of 80%, putting it in position to establish a bearish crossover in the near future.

HRW Wheat (New-crop Futures): The Kansas City July 2017 contract closed at $4.64 1/4 down 9 1/4 cents for the week. While the contract's secondary (intermediate-term) trend remains up its minor (short-term) trend has turned down. This could lead to a sell-off, leaving the next secondary target of $4.90 1/2 unchallenged for now. This price marks the 50% retracement level of the previous downtrend from $5.70 through the low of $4.11 1/4.

HRS Wheat (New-crop Futures): The Minneapolis September 2017 contract closed at $6.66 1/4, up 19 1/4 cents for the week. The contract remains in a strong secondary (intermediate-term) and major (long-term) uptrend. Last week's rally saw September Minneapolis extend its run toward next major resistance at $6.93 1/4, a price that marks the 33% retracement level of the previous major downtrend from $11.20 through the low of $4.80 1/4. 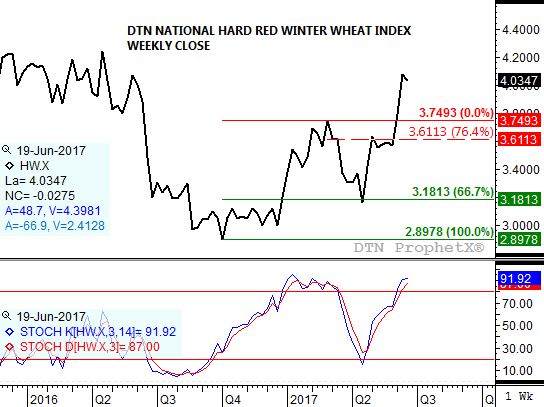