I spent most of this past week at the Farm Progress Show outside of Boone, Iowa. In a normal year, if a wheat question were asked at the end of one of the weather and market discussions we hold in the DTN building, the crowd would disperse faster than cockroaches when the light comes on. But not this year. It could be that one of the main topics of discussion I had was lessons corn growers could learn from wheat. Whatever it might have been, people stayed. And asked questions. And listened to answers about wheat.

On the last day, one gentleman had more of a statement than a question: "Can't you say anything nice about wheat?" He was referring to my recent columns "The Last Wheat Harvest" (July 8) and "Paper Wheat" (August 26), as well as my latest appearance on IPTV's Market to Market program (you can watch it here: http://site.iptv.org/…) where host Mike Pearson and I visited in length about the problems facing wheat. Back at the farm show, I thought about for a minute before answering a polite, "No".

However, it turns out I can say something nice about wheat. And it has to do with the rally December contracts posted this past Thursday. If you look at the attached daily chart for December Chicago, you'll see two ellipses on the daily stochastics study (second study). Notice that the first one is red (from June 9) corresponding with the contract's high of $5.51 1/2. This signaled the spot that stochastics established a bearish crossover (the faster moving blue line crossed below the slower moving red line, with both above the overbought 80% level) indicating the minor (short-term) trend had turned down.

Fast forward to the right hand side of the same study and you see a green ellipse. This marks the latest bullish crossover below the oversold level of 20%. This pattern usually, but not always (as shown with the previous series of bullish crossovers seen between June 30 and August 3), indicates the trend has turned up. In this case, again, the minor (short-term) trend.

Yes, I know. I've already pointed out the series of previous bullish crossovers that amounted to bupkis. And this possible uptrend isn't off to the greatest of starts with Thursday's daily volume (bottom study) coming in at 63,440 contracts, well below what was seen daily during the latter stages of the previous downtrend. Historically, technical analysts would like to see increased volume as a contract tries to change its direction, indicating the presence of increased buying interest.

So what nice thing am I saying about wheat? It's possible, possible, that the market is set for a short-term uptrend. While we have to remember wheat has this personality quirk of posting false technical signals, this week's action has been the most bullish the market has looked in months. 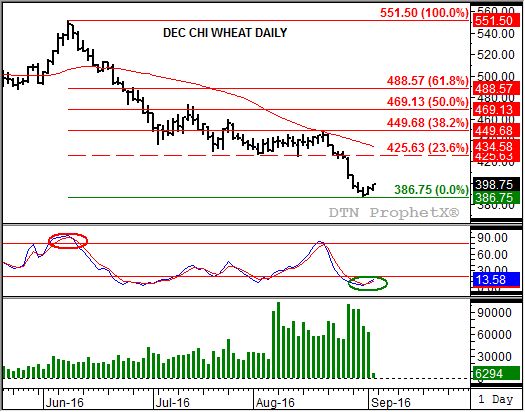