The drought conditions and high feed costs on the Prairies in 2021 has taken a further toll on cattle numbers, as seen in Statistics Canada's July 1 Livestock estimates.

Statistics Canada has estimated the number of cattle and calves on Canadian farms at 12.3 million head as of July 1, down 2.8% from one year ago, the largest percentage drop seen since 2015, while the smallest herd estimated since 1988, as shown by the brown line on the attached chart. This is the first year-over-year drop seen in three years, with a 0.5% year-over-year increase in numbers reported for July 1, 2020, and July 1, 2021.

The yellow line on the attached graphic represents the number of replacement heifers reported. At 622,100 head, this has fallen for a second year, the lowest count in 12 years and 9.3% below the five-year average.

Previous Post (Why Friday's Cattle on Feed Report Shouldn't Consume Your Time or the Market's)
Next Post (Why the Recent Hiccup in the Cattle Market? ) 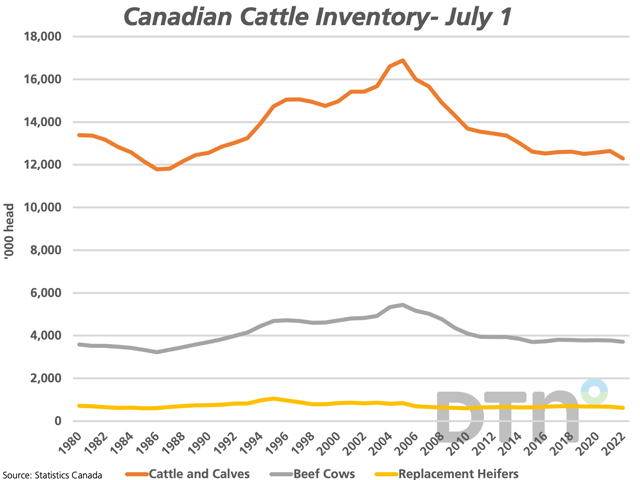