DECATUR, Ill. (DTN) -- The farmers in the buffet line at the Illinois Soybean Association's winter meeting couldn't believe their eyes. Bowls of edible soybeans lined up next to the mashed potatoes and corn kernels as a dining option.

Soybean farmers may help feed the world, but it was obvious this group was not accustomed to seeing them on the menu. The bowl of beans bogged down the line like an overtaxed auger and a debate over whether the contents of the bowl were actually "soybeans" ensued.

I had to partake. "They are edamame. I grow them in my garden," I said.

One of the guys turned and responded: "Eda-who?"

"Ay-dah-MAH-may," I said. "Vegetable soybeans. They are good. You should try them." Noses turned up and I was reminded of small children being told they couldn't leave the table until they'd eaten their peas ... or heaven forbid, Brussels sprouts. One brave soul decided to be polite and spooned a few onto his plate. The others decided iceberg lettuce salad was their "green" for the day. Hey…everyone knows free lunches at farm meetings come with no nutritional obligations.

That exchange came to mind as I read a news release written by Martin Williams, a University of Illinois soil scientist and USDA-ARS ecologist. Williams made note that edamame demand has picked up in the U.S. and he has been exploring agronomic ways to make the crop more commercially competitive. Most of the edamame consumed in the U.S. today comes from Asia.

Green vegetable soybeans are from the same family, Glycine Max, that farmers grow on some 85 million acres across the U.S. So it would seem they might be a good alternative crop. "Vegetable processors identify weed interference as a major limitation to domestic edamame production on a commercial scale," said Williams.

"Effective weed management isn't about applying one herbicide, and saying 'problem solved'. It requires a multitude of integrated tactics, including a combination of herbicide active ingredients," he noted.

The study examined the effects of eight treatments using herbicides applied both pre- and post-emergence, plus a weed-free control and a non-treated control. Registered herbicides clethodim, imazamox, linuron, trifluralin, and S-metolachlor were tested, along with two additional herbicides, imazethapyr and saflufenacil. The researchers measured weed biomass and edamame yield in all treatments, using three different edamame cultivars: IA1010, Butterbean, and Gardensoy 43, which was developed at U of I.

"All weed management treatments increased marketable pod yield relative to the non-treated control, but S-metolachlor with a follow-up application of imazamox had among the highest yield and lowest weed biomass without crop injury." Since these experiments were initiated, two additional herbicides have been registered (bentazon and fomesafen) and more are being considered, Williams said.

The three edamame cultivars differed in their ability to compete with weeds. Gardensoy 43, which had the greatest pod yield of the three, also appeared to be the most competitive. In fact, weed biomass was 29 percent lower with Gardensoy 43 than the other cultivars.

The difference in cultivars is promising for all farmers, particularly those interested in weed control using fewer chemicals, he noted. "As part of an integrated system including inter-row cultivation, using cultivars that are more competitive, and using some of the more effective chemical treatments as a package, we are removing weed interference as a barrier to domestic edamame production," Williams said.

My first taste of edamame came several years ago when I interviewed the now late Dick Bernard. I was trying to understand the nuisances of soybean breeding and had arranged a meeting with the venerable plant breeder. My lasting memory from that encounter is Bernard -- then in his 80s -- demonstrating how he could shoot edamame beans into the air by squeezing the cooked pod and catch it in his mouth. Bernard developed the Gardensoy line that is still available today.

The edamame seed is larger and soybeans are harvested in the pod, at the fresh green stage before they are mature and dry. They are often cooked and served in the pods -- like peanuts in the shell -- and have a sweet, nutty flavor.

Timely harvesting would definitely be a factor in broader commercialization. This crop can't sit in the field and wait. In some of Williams' other writing he indicates some cultivars are too bushy for effective machine harvest.

I've experienced some germination issues. Insect pests have been minimal -- I had a little stinkbug feeding last year. However, my biggest challenge has been fighting deer and rabbits. They LOVE their edamame! The only way I've been able to successfully raise it is through aggressive fencing.

Other institutions also appear to being looking at this crop as a potential niche product to increase on-farm income. So far, in-season farmer's markets seem to be the biggest marketing outlet. Read about studies at Virginia Tech University using high tunnels for spring and late fall harvest production here: http://bit.ly/…

Williams' article on weed control can be found here:http://bit.ly/…. 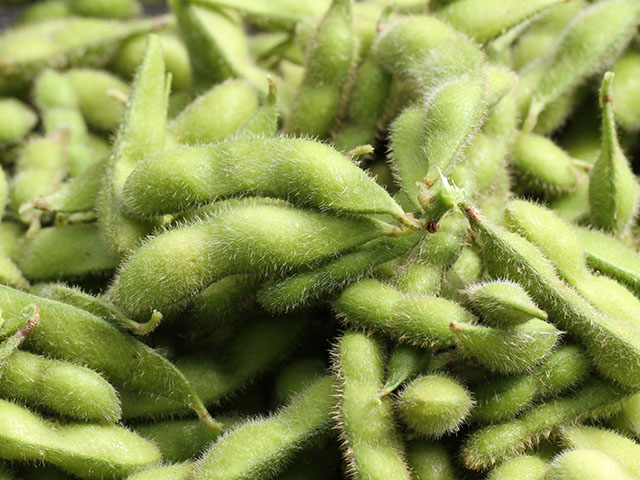