DECATUR, Ill. (DTN) -- One of my son's preschool teachers started each school day having the children sing this weather report:

Whether the weather be cold

Or whether the weather be hot

Whether the weather is fine

Or whether the weather is not

We'll whether the weather

That little ditty repeated in my thoughts this past week as we alternately traveled to holiday activities and spent hours waiting to hear that loved ones would arrive back home safely after visits. News reports in downstate Illinois and parts of Missouri are full of closed interstate highways south of St. Louis. Details of historic flooding that have already left the tragedy of at least 21 people dead are sad reminders that Mother Nature holds the cards.

DTN senior ag meteorologist and weather guru Bryce Anderson sent me a note earlier Thursday morning that the southern sections of the Corn Belt could be in for another soaking this weekend and next week. Our hearts, hopes and prayers go out to those facing evacuations along already swollen rivers and streams.

Floodwaters have already breached some federal levees that protect communities and farmland. The U.S. Army Corps of Engineers said Wednesday that nine levees have been topped by water and dozens of others are considered vulnerable.

Weather is always at the center of our focus in agriculture. Current conditions are never idle conversation in this business of farming. Several of our loyal readers have emailed us about weather situations over the past few days.

Last Sunday Will Nicholson, Cherry Valley, Arkansas, measured 59-degree soil temperatures and saw green sprouts in flowerbeds. As of Tuesday, flooding wasn't too bad in that area, but he was expecting grain hauling to Memphis to be shut down shortly because of rises in the Mississippi River.

Scott Wallis, Princeton, Indiana, expected rivers in his area to be out of their banks for several weeks following post-Christmas rains. However, so far, he'd experienced very little damage from winds or storms. "Biggest concern here, except for the prices of commodities, is the growth of the wheat. Lots of worries of freeze damage when winter finally arrives," said Wallis.

Pete Bardole, Jefferson, Iowa, tallied over 50 inches of rain this year (2015). "We had 5.5 (inches) the first part of December and have now added a foot of snow," said Bardole. "The ground is not frozen, so it makes it hard to move the snow. With the wet growing season and fall, we would like to have some frost in the ground, but that is not going to happen with this much snow cover.

"One thing is for sure, the tiles will run all winter," Bardole said.

Karen Johnson, Avoca, Iowa, received an early Christmas gift of 8 inches of snow with calm winds and no drifts. Another 3-4 inches of snow fell after that with temperatures plummeting into the teens to give her a real taste of winter over this past weekend.

"The grass is still green here (temperatures had been in the 40s and 50s right up to the snow fall), but it's under several inches of snow," said Johnson. That makes for tough livestock conditions. "Feeder calves in the yards are in some pretty deep mud, which makes feeding hay pretty challenging," she added. "The calves will go to market in January sometime, so that will help the feeding problems."

Phil Carter, New Era, Michigan, feels pretty lucky this season. There's been no severe weather or flooding, despite having more than his fair share of wet weather over the past two weeks. "We also dodged the bullet on the predicted ice storm, it was sleet instead," said Carter. "The 3.5 inches of wet slop we did get was tough to move, would rather have 12 inches of lake-effect snow."

He hasn't noticed any early budding on apples yet, but noted that many fellow fruit growers are concerned about the lack of snow cover to insulate the trees from too cold conditions. "But we wouldn't be farmers if stress and worry were not a part of our everyday lives," he added.

We must weather the weather -- whether we like it or not. 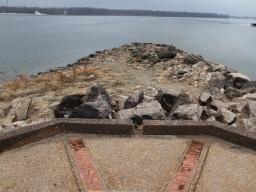