By now you have read many stories about the shrinking Mississippi River and the negative impact it is having on shippers and farmers and other commerce relying on the river to ship commodities and other goods. But did you know the Mississippi River is the largest and most important river in North America and where it originates?

This great river, also referred to as the "Mighty Mississippi," originates as a small brook flowing out of Lake Itasca in Minnesota, then 2,340 miles later empties into the Gulf of Mexico.

"At Lake Itasca, the river is between 20- and 30-feet wide, the narrowest stretch for its entire length. The widest part of the Mississippi can be found at Lake Winnibigoshish near Bena, Minnesota, where it is wider than 11 miles. The widest navigable section in the shipping channel of the Mississippi is Lake Pepin, where the channel is approximately 2 miles wide," noted the National Park Service (NPS) on its website on Mississippi River Facts.

"At the headwaters of the Mississippi, the average surface speed of the water is about 1.2 miles per hour -- roughly one-half as fast as people walk. At New Orleans, the river flows at about 3 miles per hour. But the speed changes as water levels rise or fall and where the river widens, narrows, becomes shallower or some combination of these factors. It takes about three months for water that leaves Lake Itasca, the river's source, to reach the Gulf of Mexico," said NPS.

You may wonder why the severe low water conditions are only affecting the Lower Mississippi and the tributaries that feed it. "North of St. Louis Missouri, a total of 29 lock and dam systems were constructed, forming a stairway of water from Minnesota to Illinois. From the first lock and dam at Minneapolis-St. Paul, Minnesota to the last one at Granite City, Illinois, there is a drop in elevation of 420 feet," noted the United States Army Corps of Engineers (USACE). "The locks are necessary at each of the dams to allow boats to navigate from one pool (the water backed up behind each dam) to the next. These dams were constructed to only aid navigation; they were not designed for flood control." The Corps maintains a 9-foot navigation channel as an important component to the inland navigation system.

On the Lower Mississippi River (LMR), there is no need for locks and dams because, with the addition of the Missouri, Illinois, Arkansas, Ohio, and other rivers, it is naturally deep enough and wide enough for navigation stated the Corps. Except now. And the savior for the LMR, the Ohio River, is in as bad -- if not worse -- shape than the LMR. The Ohio River feeds 70% of the water to the LMR and rain in the Ohio River Valley has been little to none for months.

"Dredges are operating on all rivers nonstop but are having trouble keeping up with problem areas that pop up on a regular basis. Transit is slow going on all rivers with traffic limited to one way in most areas. Some locations are finding it difficult for northbound and southbound traffic to pass due to narrow channel widths," said Tom Russell, of Russell Marine Group, said in an emailed river update Oct. 30.

There are some shippers on the Ohio River and south along the LMR that are either unable to get empty barges placed at their stations due to lack of availability and/or because the water is too low at their dock to get a barge placed. Barge lines noted that docks and harbors may see further draft restrictions locally, some reportedly at 7 feet max, stated American Commercial Barge Lines (ACBL) on its website.

The industry has had reduced LMR drafts of 9 feet since Oct. 17 both northbound and southbound, reflecting a 24% to 30% reduction to tons per barge versus normal conditions. "The Port of Baton Rouge above LMR mile 228 recently reduced drafts from 45 feet to 41 feet for deep draft ocean-going vessels. In addition, the industry has agreed to 25-barge max tow size SBD (southbound), reflecting a 17% to 38% reduction to boat capacity," said ACBL.

But there is some good news as Upper Mississippi draft restriction softened temporarily as a few rounds of precipitation crossed the Midwest and into the Ohio River Valley last week. "While the drafts remain restricted to 9 feet in St. Louis, the additional water has allowed for barges with corners under 9 feet 6 inches to be allowed permission to transit and/or shift within the harbor. This is great news for docks in the area to resume discharge operations for barges previously unable to final," said ACBL in its Oct. 28 river update.

Russell added, "Although encouraging, water levels are still low and operating conditions will be difficult. Expect ongoing closures throughout the system due to groundings and dredging operations. A grounding occurred at mile 525 on the Lower Miss Sunday morning Oct. 30, closing the river until barges can be refloated. Also, we are entering fog season at the Gulf, which could cause additional slow-downs."

As for the Ohio River, ACBL said dredging is reducing transit at OR mile 965 to 974. "Dredging is ongoing in the Mound City area, with intention to work the channel deep enough to transit 9 feet when the Cairo gauge is at or above 4 feet 5 inches. Currently, traffic is restricted to one-way and tows over 9 barges must transit daylight only. There will be a nightly closure from Oct. 29 through Oct. 31 from ... 6 p.m. to 7 a.m. to allow the dredge to work uninterrupted," said ACBL.

According to the National Weather Service LMR forecast for Oct. 30 through Nov. 1, "Thunderstorms will continue to be possible with a low-pressure system as it moves towards the Tennessee and Ohio valleys on Sunday." In other words, a little more water maybe and while it won't be the nonstop rains we are hoping for, every drop helps when it comes to giving the Lower Mississippi River even a temporary boost.

"And then the other impact is that as beans are not exported that matters not that much demand, local values come down, local basis comes down, and that may be a boost for crush that you may be able to crush lower-priced beans or maybe eventually lower-priced corn for Carbohydrates Solutions."

DTN Refined Fuels Reporter Liubov Georges said on Oct. 28, "This week's rally in Ultra-Low Sulfur Diesel (ULSD) futures was realized amid widening diesel shortages, which are spreading from New England and broader New York area to the Southeast and westward to Tennessee. Reported outages and allocations at distribution terminals all along the East Coast were exacerbated by low levels on the Mississippi River that is constraining barge movement. Valero Energy reportedly cut runs at Memphis refinery by about 20% due to shipping issues on the Mississippi River."

U.S. Grains Council noted in its weekly distillers dried grains with solubles (DDGS) update Oct. 27, "Navigation issues on the Mississippi River have also pushed additional product into the domestic market, adding pressure to values. Of note is the fact that offers and trades for DDGS into the river system are starting to be quoted on a 34% pro-fat basis (versus the typical 35%)."

Gro Intelligence stated on its website on Oct. 27, "With the Mississippi River near record low levels, disruptions to river barge traffic are hampering fertilizer deliveries to newly harvested fields in the U.S. Corn Belt. While the bulk of nitrogen, phosphorus, and potassium-based fertilizers is applied to fields in the spring, farmers also apply the fertilizers after the fall harvest to replenish soil nutrients. Some 61% of U.S. corn has been harvested as of this week, as shown by this Gro Portal display. Restrictions on barge capacities heighten the risk of localized supply outages at key fertilizer distribution hubs throughout the Corn Belt. That could force some farmers to reduce their post-harvest fall applications and could increase upriver fertilizer prices relative to prices downriver at New Orleans."

Bloomberg reported recently that areas of the St. Lawrence close to Montreal have reached 10-year lows, while the section of the seaway from Lake Ontario through to the Port of Montreal is reporting water levels that are below normal for this time of year.

"In general, when we have lower water levels, ships have to lighten their loads," stated Frank Seglenieks, who is the Canadian co-chair of the International Lake Ontario-St. Lawrence River Board of Control. Shippers will respond by increasing rates. Water levels have normally reached their peak by this time of year and are entering into a period of seasonal decline.

DTN Canadian Grains Analyst Cliff Jamieson said the Government of Canada Monthly Water Level Bulletin is forecasting high chances the probable range of future levels for both Lake Ontario and the Port of Montreal will remain below average during the next six months, while levels remain well above all-time lows reached in the mid-1930s on Lake Ontario but could test all-time monthly lows reached in the Port of Montreal in 2007 in the months ahead.

"Focus will lie on the water supplies for this region of the seaway, defined as the water entering the lake from the upstream lake as well as water entering from the lake's basis. As a result, winter temperatures and precipitation will be watched closely," added Jamieson.

According to an ABC News report last week, "Bodies of water all over North America are drying up as a result of drought and a decrease in precipitation."

NWS has a map of where currently there are 11 gauges on the LMR at or below low water threshold. Click on the brown circle and you will see a live update of where those gauges are located. Go to: https://www.weather.gov/…

Link to DTN "How Much Rain to Refill Major Rivers?": https://www.dtnpf.com/…

Link to more facts about the Mississippi River from the National Park Service: https://www.nps.gov/… 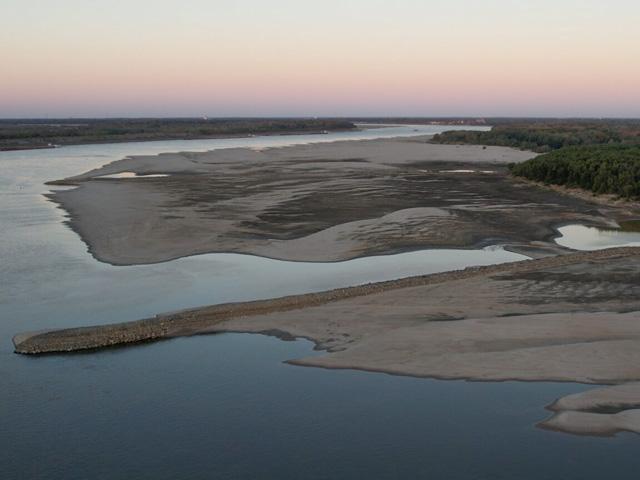