LINCOLN, Neb. (DTN) -- With many of the major river systems running at all-time low levels in some areas of the country, the main question being asked is how much rain would it take to replenish the Mississippi, Ohio and Missouri rivers?

In recent weeks we've seen barge traffic stalled in parts of the Mississippi and Ohio rivers, and newly announced water releases in Tennessee, with little chance of significant precipitation in the affected areas for the foreseeable future.

The falling river levels come at a time when farmers are harvesting grain and shipping to market, raising questions about what it all means for agriculture.

On Saturday, the National Weather Service observed water levels on the Mississippi River at Memphis, Tennessee, set a record of minus 10.81 feet. Negative river measurements are below the agreed upon zero-level gauge.

From Memphis to New Orleans, Graschel said, water levels are as low as they've been since 2012.

"It is hard to compare records from the 1800s, early 1900s because of levees, channel improvements and addition of dams which make stage levels different from the modern era," he said.

"Below New Orleans, a saltwater wedge has moved upstream along the bottom channel, requiring the USACE (U.S. Army Corps of Engineers) to build a low-water sill to impede the salt-water wedge. Several municipalities use the Mississippi River for their water supply and too much salt can make it unusable, thus the need for a low-water sill."

The Corps of Engineers dredges low areas and the U.S. Geological Service uses buoys to mark the navigation channel to help with traffic.

"We typically have low-water conditions every 10 to 12 years."

DTN Ag Meteorologist John Baranick said because the drought is so widespread it will take quite some time to replenish the rivers.

"It's going to take multiple weeks and months of widespread precipitation between the Rockies and Appalachians to get out of this drought," he said.

"Every river system that feeds the Mississippi is dealing with some sort of dryness or drought situation and it will take improvements on all of them to get the Mississippi out of it."

However, Baranick said the current forecast doesn't look promising. Though rainfall events may come and go, he said DTN's forecast is for near- or below-normal precipitation through January.

According to the National Oceanic and Atmospheric Administration's winter outlook released last week, the drought is expected to continue or worsen in the areas currently hit the hardest.

"We might see a typical La Nina pattern shaping up for more enhanced rainfall in the Ohio River Basin," by sometime in January, he said.

Water levels in the Missouri River basin system, according to information from the Corp of Engineers, stood at 47.6 million-acre feet as of Oct. 21. Though the basin has been extremely dry, that level is still far above the historical minimum of 33.9 MAF set in 2007.

To put the dryness in perspective, in 2011 the Missouri River basin reached its historical max at 72.8 MAF.

The Corps expects to slow releases from Gavins Point Dam starting on Nov. 19. Releases will continue to slow until about the second week of December until it reaches the minimum 12,000 cubic feet per second.

Deb Calhoun, senior vice president for the Waterways Council, said even reservoirs that hold back water are "below average, which is also a concern."

Though the dryness in the Mississippi River garners much of the national attention, Calhoun said the Ohio River also is experiencing some significantly low levels.

"The Ohio River is also seeing low water, with dredging occurring currently near Olmsted Locks and Dams," she told DTN.

"We normally experience low water at this time of year, but this is a significant event that is at historic levels. Normally 40-plus barges are lashed together in a tow to deliver America's building block commodities such as agricultural products to feed the world, energy products, aggregates for construction, and large cargoes like wind turbine blades; but given the low water, tows have been reduced to 25 or less barges. This is inefficient but commerce is moving, slowly, after dredging occurs."

Calhoun said although it is a "pray-for-rain" situation the U.S. Army Corps of Engineers and various industries that rely on river transport are investigating options if water levels continue to drop.

That can include dredging hot spots and releasing water from other sources where it is feasible.

This past week the Tennessee Valley Authority announced it was releasing water from the Kentucky dam. According to the TVA Facebook page, special water releases were scheduled from the Tennessee River and Barkley dam on the Cumberland River. The releases were being done with the hope of stabilizing conditions on the lower Ohio and Mississippi rivers.

"This is the worst time of the shipping season for this to occur, as it is harvest season for agricultural products, a major positive export product for the nation -- 60% of ag exports move on the inland waterways at the most cost-competitive price for farmers," Calhoun said.

"This year, America's ag products are even more sought after given the war in Ukraine. Shipment of coal is also being impacted and it is critical due to the need for power during the approaching winter in Europe and the war in Ukraine."

Calhoun said although the current river-transport disruption is concerning, the inland waterways industry is "very resilient."

"There is a long history of navigating all sorts of high-stakes challenges," she said. "Hurricanes, COVID, high water, low water and more that we can apply to navigating this current one. It is imperative that Congress continues to invest in the inland waterways system and fund its operations and maintenance work done by the Corps of Engineers so that dredging can occur in low water and in high water, both of which can sometimes occur in the same shipping season."

"How Low Can It Go? Mississippi River at Memphis Breaks Another Record," https://www.dtnpf.com/… 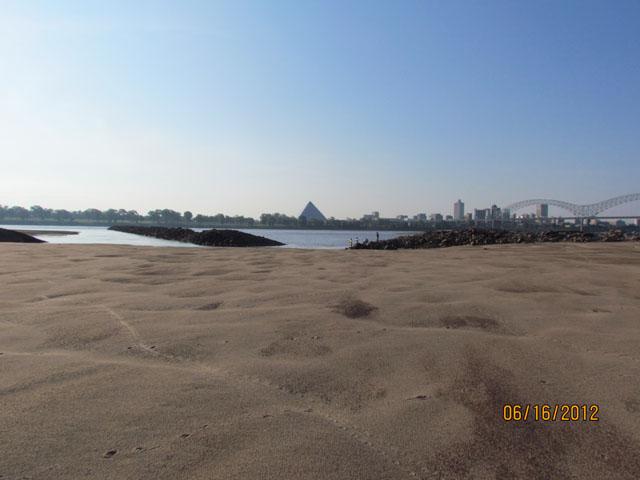