USDA will release several reports Jan. 12, 2023, including the first estimate of 2023 U.S. winter wheat seedings, the final 2022 U.S. corn and soybean production figures, the monthly WASDE report and also the quarterly grain stocks on- and off-farm as of Dec. 1, 2022.

The stocks numbers are always of interest, at least in corn, because that is the way the trade gauges feed usage as this number is backed into from total supplies minus export and food, seed, and industrial demand. USDA's 2022/23 corn feed estimate of 5.30 billion bushels (bb) is the lowest since the 2015/16 season linked to historically high corn prices and falling grain consuming animal units (GCAU).

This graphic is a scatterplot of the metric tons of corn fed per grain consuming animal unit versus the average farm price of corn and, as expected, it shows an inverse relationship with high prices resulting in lower corn fed per GCAU and vice-versa with the formula explaining about 70% of the variability seen in corn feed use.

Though some feel the USDA may be understating corn feed use in light of high wheat and DDG prices, the graph does show that given the second highest average farm price ever this season at $6.70/bushel, the 1.357 MT/GCAU projection is far higher than the 1.22 that is calculated by the trendline formula.

We should note that over the past five years Sep-Nov corn feed use has averaged 44% of the annual total, implying a corn feed use of 2.332 billion bushels when the Dec. 1 corn stocks number is released. 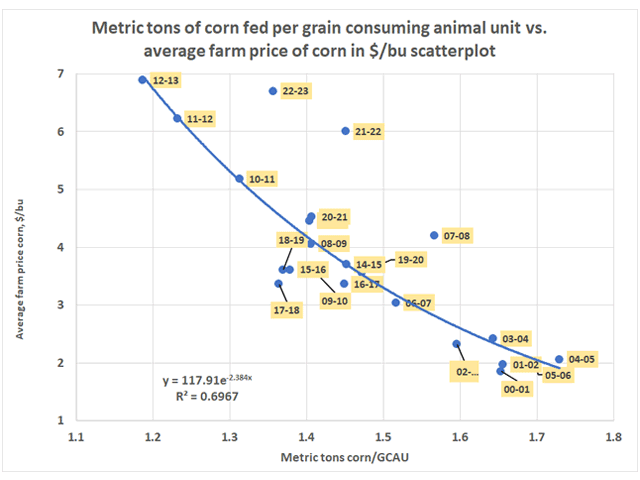