Despite the slowest U.S. corn and soybean planting pace ever, in its September crop production report the USDA maintained 2019 yield projections that are just slightly below trend for both.

Much of this is based on generally good growing conditions through most of the top corn and soybean producing states this past summer (June-August) in terms of both temperatures and precipitation.

The National Oceanic and Atmospheric Administration (NOAA) in its State of the Climate report issued for August 2019 noted that for the meteorological summer (June-August), the average temperature for the lower 48 states was 72.4 F, 1.0 F above average, ranking in the upper third of the historical record.

The summer precipitation total across the Lower 48 was 8.83 inches, 0.51 inch above average ranking in the upper third of the historical record due to a wet June.

This chart shows the percent above or below of the average June-August total precipitation this past summer on the left hand axis while on the right hand axis is the difference in degrees Fahrenheit from the average 1950-2019 June-August temperature.

As far as temperatures, no state was particularly hot though North Carolina, Ohio, Pennsylvania and Texas did have readings this past summer at least one degree Fahrenheit above their long-term average.

As for precipitation, NOAA notes that South Dakota had its fifth wettest June-August period while Kentucky experienced its sixth wettest such period on record.

As the chart depicts, these two states had June-Aug 2019 rainfall 40.6% and 33.4% above their long-term average with Arkansas seeing moisture 37.4% above its average.

On the other hand, NOAA indicates that below- to much-below-average precipitation was observed across Iowa and upper Michigan with Colorado and Texas also drier than normal.

Keep in mind Iowa's total 2019 summer rainfall of 10.76 inches was actually higher than the 10.27 inches seen in 2017 yet Iowa's row crop yields were quite decent that season.

The biggest weather issue remains how fast the Midwest corn and soybean crops can mature ahead of the first fall freeze though with recent elevated temperatures in that region of the country and frost free maps at least through the first week of October, concern in that regard is fading. 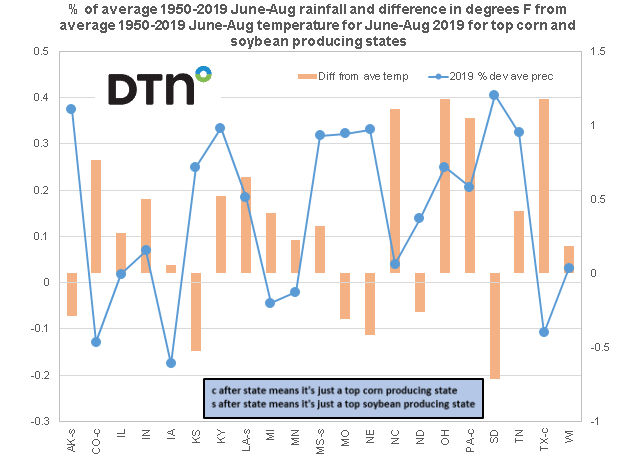