The new marketing year started for corn and beans on September 1 and it is not off to an auspicious start.

It would not be a surprise to see USDA pare export projections for corn, soybeans and wheat in this Thursday's WASDE report.

In the August supply-demand report USDA did pare projected 2019/20 corn exports by 100 million bushels (mb) to 2.050 billion bushels (bb) with last year's 2.10 bb estimate likely to be slashed also given the latest figures released last week by the Commerce Department.

U.S. corn sales have just been abysmal over the past few weeks as intense competition from Argentina, Brazil, Russia, Ukraine and even South Africa has led to a precipitous decline in our corn export sales over the past two decades.

This is reflected in the accompanying graphic that shows the U.S. share of the three largest commodities -- corn, soybeans and wheat -- exported by volume.

15 years ago, the U.S. accounted for over two-thirds the corn exported on the planet, though with our expectation that this year's overseas sales projection will be lowered from the current 2.050 bb figure, the share this year should fall below the 25% level.

This could be the second lowest ever next to the 19.4% share in the 2012/13 season that was entirely attributable to the devastating 2012 U.S. drought that sent our corn values over $8.00 per bushel.

USDA did up its export projection by 25 mb to 950 mb, though news that export prices for Russian wheat fell last week for the sixth consecutive week and reached their lowest level since October 2017 amid strong competition from other producers is certainly sobering.

The export situation for soybeans has captured all the headlines given the worlds' largest importing nation, China, has a defacto boycott against U.S. product due to the ongoing trade wars.

Furthermore, the fact that China has lost about one-third of their hog herd due to the impact of African Swine Fever has also pared their imports of both oilseeds and protein meals from all destinations.

Nonetheless, the absence of the PRC from the U.S. soybean market has been extremely beneficial to Argentina and Brazil and is the prime reason why, after hovering at 40% for four straight years, the share of global soybean exports commanded by the U.S. fell to 31.2% last year with only a slight recovery to 32.4% forecast for this season.

Taken together, the combined export share of these three commodities (other than seen in the 2012/13 season due to the impact of the 2012 U.S. drought) is projected at 25.3% but likely downward revisions in both corn and soybean exports this year may bring the percent below the 2018/19 figure of 25.1%. 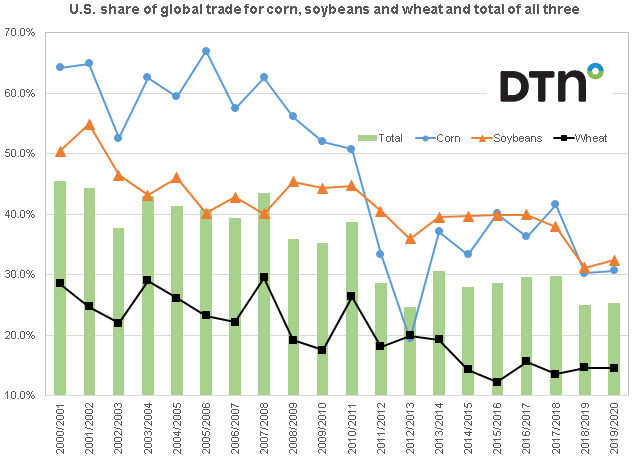