This graphic shows the 10-state objective corn plant population in plants per acre on the left hand axis vs. the implied ear weight in pounds per ear on the rght hand axis.

With the harvested acreage from each of the ten states along with their respective yields, we are able to calculate the 10- state weighted yield (shown in the yellow boxes).

In its crop production report, USDA furnished a graphic showing the weighted ears per acre for the 10 states vs. the implied ear weight for the past number of years.

For every year from 2013 through 2018, the final USDA ears per acre figure was lower than reported in September.

If history holds, the January 2020 crop production report should show the ten-state ear count below 28,650.

The other factor in calculating yields is the ear weight, but as opposed to plant populations that have continually increased over time, ear weights are more reflective of growing conditions during the year.

A favorable season featuring timely plantings along with ample moisture and average to below average temperatures tends to produce a bigger or heavier ear than a season characterized by late seedings along with dry conditions and heat.

If the implied ear weight moves lower in the next few reports, combined with the likely downward ear population/acre figure, it should result in lower yields than the 168.2 bpa figure given last week. 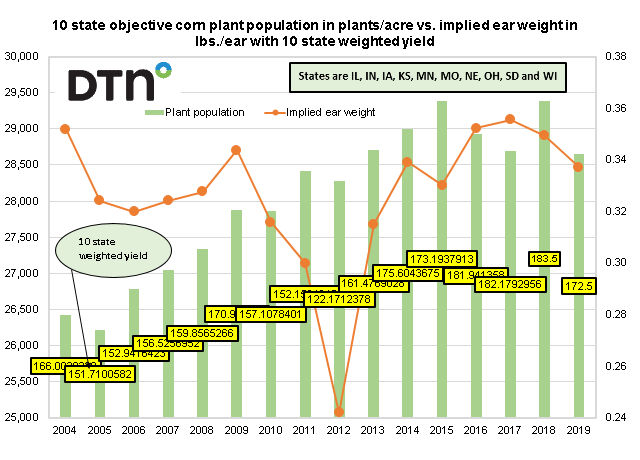