The markets are still trying to gauge the effect of record U.S. rainfall over the past 12 months on row crop yields.

USDA will shed light on this situation when it issues its first field-based crop production report August 12.

Based on the copious amounts of precipitation this past spring that resulted in the slowest corn and soybean planting progress ever, USDA will resurvey farmers in 14 key producing states to see what they actually put in the ground.

One change to the August crop production report: USDA will not be conducting its objective field surveys where personnel actually go out in the fields to count corn stalks and soybean pods among other measurements.

The objective field survey part of the August crop report has always been somewhat controversial in that it is still early in the growing season and often both corn and soybean plants are too immature to record any accurate yield indicators.

USDA will still continue with its Agricultural Yield Survey (AYS) part of its report which is farmer assessments of their yield prospects augmented by satellite data information.

The accompanying graphic attempts to quantify the amount of moisture the top 21 corn and soybean producing states received the first half of calendar year (on the left hand axis is the Jan-June precipitation plotted on the blue bars while the red bars show the 1895-2018 average).

To start off, there is only one of the 21 states whose cumulative Jan-June precipitation came in lower thanits average, North Dakota at 13.8% less than normal.

IL, IN, MI, MO OH and PA also recorded impressively high rainfall totals for the first half of the year.

No surprise then that many of these states such as IL, IN, MI and MO have some of the lowest corn and soybean crop condition ratings for this time of year ever. 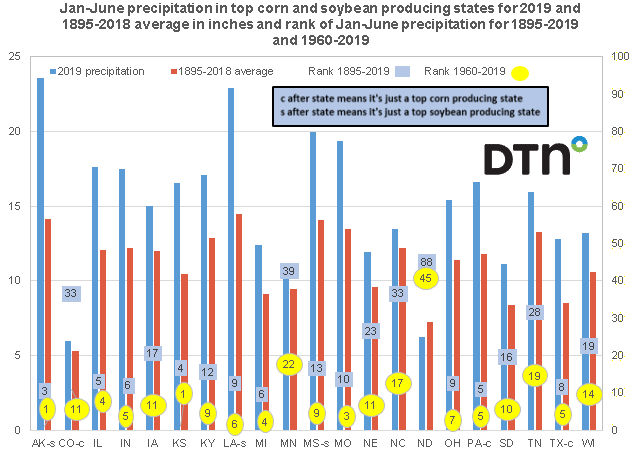