In an earlier piece, we noted how the USDA's 2018/19 soybean export forecast of 1.875 billion bushels (bb) looks very overstated given the current pace of soybean sales as of the middle of February.

Less talked about is how our corn sales are struggling to meet a record forecast from USDA of 2.450 bb as given in the February 2019 WASDE report, unchanged from the December 2018 estimate.

As a percentage of the February WASDE, the sales figure is less impressive as the 1.557 bb is only 63.5% of the 2.450 bb export projection and this is essentially the slowest sales pace in ten years and below the ten-year average of 70.7% sold as of this point in the marketing season.

Should this pace continue, the USDA may be forced to lower this year's export forecast in subsequent WASDE reports though there are a lot of factors in play, including talk of possible U.S. corn sales to China and the makings of a record South American corn harvest that could weigh on our export sales the second half of the marketing year (March-August 2019). 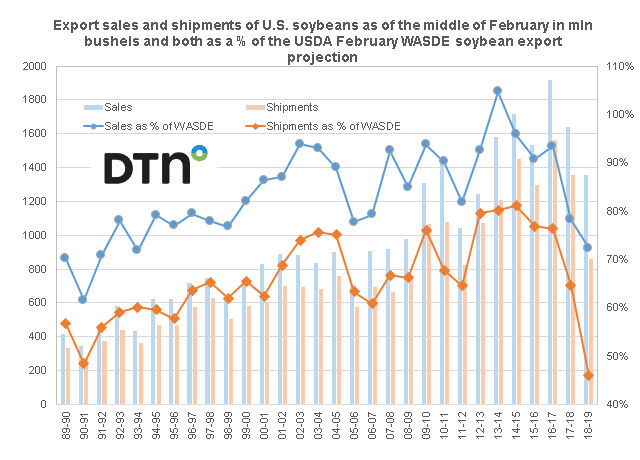