The wheat market has been getting crushed recently in part due to a lack of export business despite widespread expectations that a slowdown in Russian sales would enhance our overseas prospects.

In that regard, we are looking ahead to the coming 2019/20 marketing year which begins June 1 for wheat.

This piece looks at new crop U.S. wheat export sales in million bushels as of the fourth week of February and then plots these sales as a percent of the USDA's new crop export projection given at their annual Agricultural Outlook Forum held at the end of February.

This year's figure is 22.9 million bushels (mb) sold which, other than last year's 18.3 mb, is the lowest new crop sales figure as of the fourth week of February since the 2012/13 season.

Late last month USDA projected our wheat sales for the coming year at 975 mb which is 25 mb lower than their current estimate for this season and current new crop sales represent 2.3% of that figure, again the lowest percent since the 2012/13 marketing year.

To be truthful, we would not read too much into this early season metric as there is a lot of time left until the end of the 2019/20 marketing year on May 31, 2020.

There have been years where the early pace of wheat sales has been lagging but then exports accelerate once the marketing year gets under way. 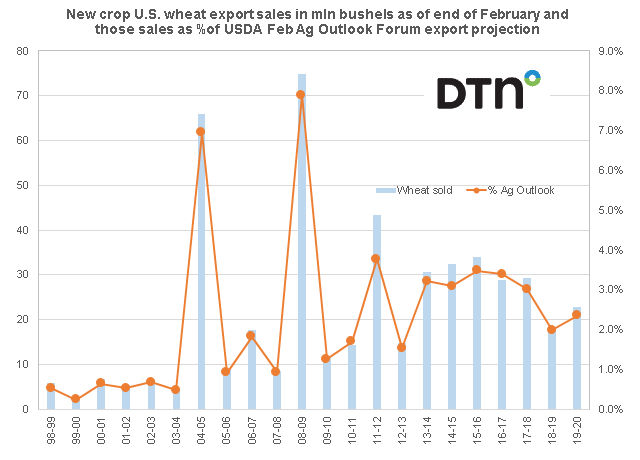