As we get closer to the 2019 U.S. spring planting season, seeing quite a few university studies on the financial prospects for Midwest grain farmers.

In general, the forecasts are rather dreary based on relatively low price projections and the inexorable rise in production costs.

A recent piece from the University of Illinois indicates that despite these conditions, incomes for many Illinois farmers were higher than would be expected and one of the main reasons were exceptional row crop yields in that state.

The last USDA crop production report estimated Illinois 2018 corn yields at 210 bushels per acre (bpa), nine bushels above the prior record set the year before with the 2018 Illinois soybean yield pegged at 64.0 bpa, five bushels higher than the previous record set in 2016.

Given the fact that according to the last USDA production report (November 2018) the U.S. has established record national corn and soybean yields in four of the past five seasons, we are examining what 2019 trend yields will be for the U.S. and the top 18 growing states first for corn and then for soybeans.

This graphic shows the actual 2018 and estimated 2019 trend yields for the top 18 corn growing states and the U.S. in bushels per acre on the left hand axis vs. percent that actual 2018 yields were of the 30-year trend on the right hand axis.

Since the USDA did not issue its annual 2018 crop production report on the 11th of this month due to the government shutdown, we are using the November 2018 figures and the trend we are referring to is the 30-year trend.

The graphic shows that the 2018 growing season was quite stellar, particularly in the Eastern Corn Belt and mid-South regions.

Its neighboring state Indiana saw its 2018 corn yield of 194 bpa actually 13.5% above trend, a similar percent above trend seen for Ohio with Tennessee the highest at 13.7% above trend and Kentucky close behind at 12.7% above trend.

In a year when the U.S. set a national corn yield record and many of the top 18 states also seeing a peak in corn yields, notable for rather poor performances was Colorado's 127 bpa yield, 9.4% below its 30 year trend with the 2018 Texas yield not only the lowest of the 18 states at 113 bpa but also the lowest in terms of trend at 18.1% below trend.

These two along with Missouri and North Carolina are the only four of the 18 states that have projected 2019 trend yields above actual 2018 yields which may imply difficulties in 2019 being as good a year corn production wise as was 2018. 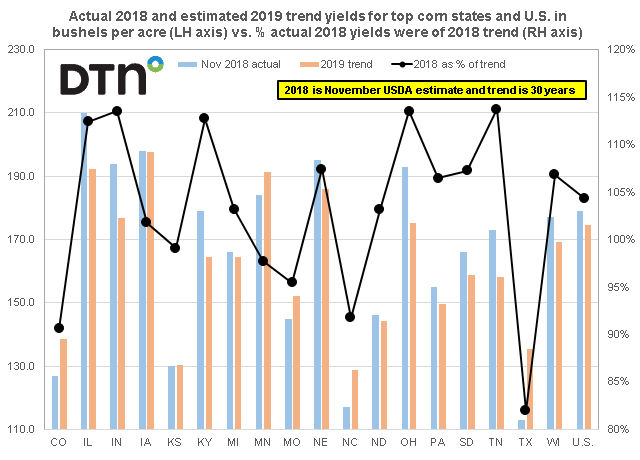