In prior pieces, we have noted how corn and soybean acreage and production has expanded into regions of the U.S. where in the past they have not been typically grown.

In this post we highlight the situation with North Dakota which in the past was more known for being one of the country's top producers of spring and durum wheat, oats, barley, sunflowers, and sugar beets among other commodities but over the past twenty years has seen their share of U.S. corn and soybean harvested acreage and production increase markedly.

The rise in North Dakota's soybean industry is even more dramatic which should not be too surprising since they have always grown a lot of sunflowers, linseed and rapeseed and have had crushing facilities for these oilseeds.

Their share of harvested soybean acreage has increased from about 2% of the national total back in 1999 to about 7.8% now with their share of output increasing from 2% to about 5.5%.

As for wheat, the vast bulk of which is hard red spring, has seen its share of U.S. harvested acreage and production stay fairly steady, around 15-16% of the national total.

Reasons for the shift into row crops is explained by enhanced returns for those two crops relative to other commodities that used to be produced, higher yielding seed varieties that are able to cope with the shorter growing season in that part of the country, and what appears to be climate changes that have brought warmer spring and summer temperatures to more northern regions.

Still the fact that production has not increased on a percentage basis as much as the rise in harvested acreage speaks to the fact that North Dakota corn and soybean yields still trail U.S. averages.

That state has also been able to maintain its share of wheat harvested acreage and production even with more land allotted to corn and soybean seedings based on the fact that total U.S. wheat harvested and planted acreage has declined over the past twenty years. 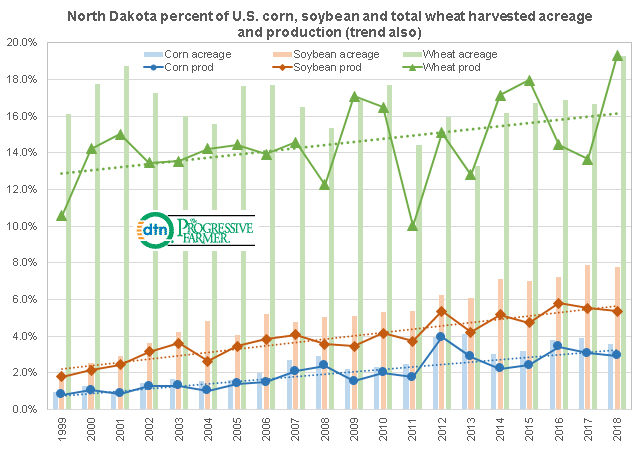