Given the fact that according to the last USDA production report (November 2018) the U.S. has established record national corn and soybean yields in four of the past five seasons, we are examining what 2019 trend yields will be for the U.S. and the top 18 growing states first for corn and then for soybeans.

As we did in corn, this graphic shows the actual 2018 and estimated 2019 trend yields for the top 18 soybean growing states and the U.S. in bushels per acre (bpa) on the left hand axis vs. percent that actual 2018 yields were of the 30-year trend on the right hand axis.

Since the USDA did not issue its annual 2018 crop production report on the 11th of this month due to the government shutdown, we are using the November 2018 figures and the trend we are referring to is the 30-year trend.

The graphic again like the corn chart shows that the 2018 soybean growing season was quite stellar, particularly in the Eastern Corn Belt and mid-South regions.

The top state is Illinois with its record 64 bpa that not only was tops among the 18 states but a whopping 18.2% above the 30-year trend.

Kentucky also deserves mention with its 54 bpa yield coming in at 13.7% above trend.

At the opposite end, North Carolina had the lowest yield at 35 bpa, coming in 1.7% below trend, the only one of the 18 states that saw its soybean yield last year coming in below its respective 30-year trend.

Interesting is the fact that 2018 was so good in most of the states that in all but two states projected 2019 trend yields are below the actual 2018 yields with the exception of North Carolina and Louisiana. 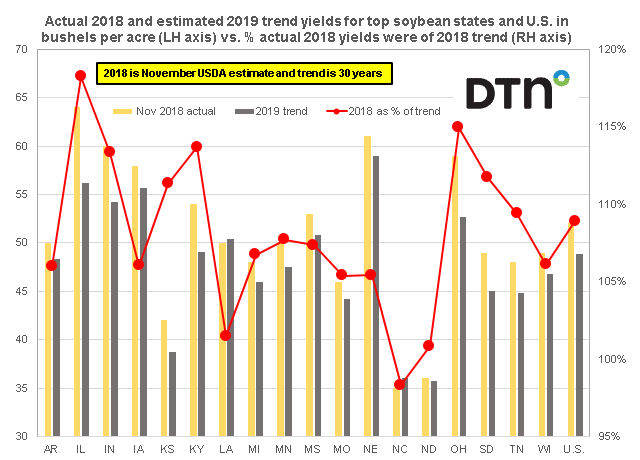