Besides the ongoing trade wars, the drop in farm prices over the past few years can be explained by what appears to be an upward paradigm shift in expected row crop yields with productivity gains in crop production exceeding demand.

Scientists are doing some great things in the lab to develop corn and soybean seeds that are not only resistant to pests and diseases but also making them more tolerant to adverse growing conditions and when weather is right, blowing the top off yields on the upside.

While crop yields have increased in major grain and oilseed producing regions throughout the world, the accompanying graphic shows that since 2000, foreign corn yields are about 40% of U.S and soybean yields averaging about 80% of the U.S. figure.

Only in wheat do U.S. figures trail foreign yield numbers by about 3% though this is based on U.S. wheat breeders and growers differentiating with respect to quality rather than quantity characteristics, with U.S. wheat mostly targeted for milling as opposed to the feed purposes often seen in the rest of the world.

The trend in recent years is even more pronounced as our superiority in yield genetics along with more favorable weather in the U.S. relative to overseas conditions has our corn yields over the past five seasons increasing at 2.7% annual pace vs 1.6% since 2000.

Soybean yields rose by a very steep 3.8% rate per year since 2013 vs. the 18-year average of 1.8% as shown in the box showing U.S. and foreign annualized five and 18 year growth rates for corn, soybean and wheat yields. 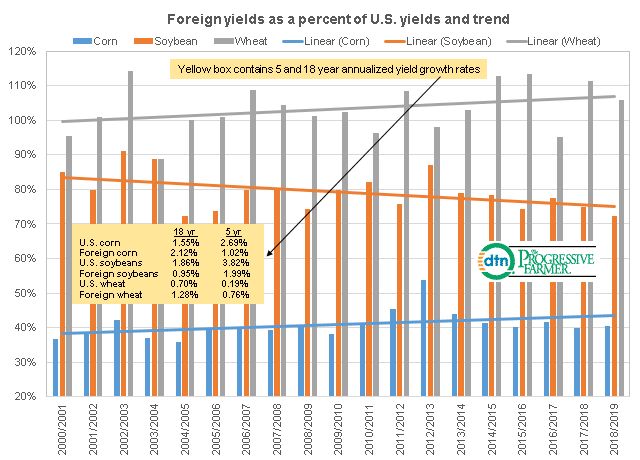