Up until recently, temperatures in much of the nation's soybean growing regions have been above normal and this appears to be accelerating growth. The evidence here is 44% of the U.S. soybean crop is setting pods, which is by far the highest percent since the USDA started keeping national crop progress figures in 1986.

The second highest percent was in 2012, the year of one of the worst droughts in U.S. history that sharply accelerated crop growth at the expense of yields.

This graphic shows the percent of the soybean crop setting pods as of July 22nd going back to 1986 while also reported is the crop condition as of July 22nd using our usual ratings system (where we weight the crop based on the percent in each category and assign that category a factor of 2 for very poor, 4 for poor, 6 for fair, 8 for good, and 10 for excellent and then sum the results).

Finally, in the blue boxes is the percent that final soybean yields that year deviated from the 30-year trend.

A regression model using crop conditions and the percent setting pods only explains less than 42% of the yield variability as this makes sense as it is generally acknowledged that the month of August is key for yield determination.

We do point out the current crop rating of 756 is one of the highest ever, topped only by the 764 rating in 2014 when final yields were 3.5% above trend, 1994 when the highest 7/22 rating ever of 797 led to a final yield a whopping 16.2% above trend, 1992 when a 762 rating had yields 8.7% above trend and in 1987 when a 781 rating resulted in final yields 5.8% above trend. With regard to the corn crop, there has been some discussion about how the advanced state of crop development may limit yields however in soybeans this may be the opposite case as the high percent of pod setting may mean the plant sets even more flowers and then pods through the month of August 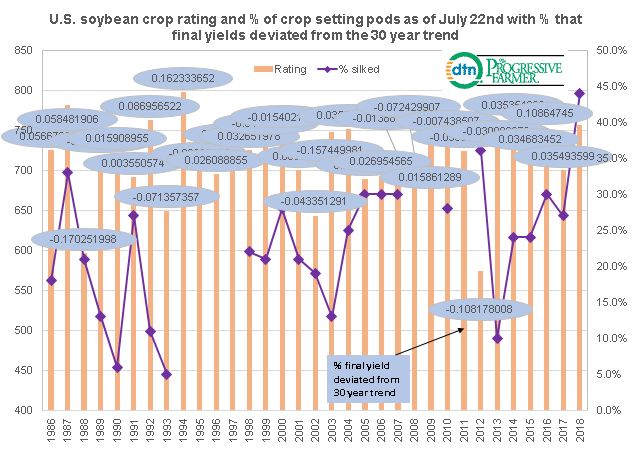