A 10 million tonne decline in foreign production was only partially offset by a 1.50 mln metric ton increase in U.S. output.

On the surface the wheat situation does not look especially bullish for even with the drop in global stockpiles, the world wheat stocks-to-use ratio at 35.0% appears to the second highest in at least 30 years next to the year ago 36.9%.

On the surface, such figures are hardly bullish but a little probing reveals a slightly more bullish situation.

The first thing is to look at the world situation (less China) for they are the world's second largest producer of wheat next to the European Union but have very little impact on the world market as they are essentially self-sufficient exporting and importing very little.

They do however possess a record 136.1 million metric tons of stocks or 52.2% of the total so if we take them out we get a more realistic picture of the world balance sheet.

In this regard, the world stocks-to-use ratio (not including China) for the 2018/19 season is projected at 20.0%, which is the lowest level since the 17.5% ratio in the 2007/08 marketing year, the season wheat prices ran to record highs by far.

Another way to look at the world wheat situation is to look at the available supplies in the major exporting countries which includes Argentina, Australia, Canada, the European Union, Russia, Ukraine and the U.S.

Using this measurement, the stocks-to-use ratio of the major exporters comes in this year at 22.3% which is well below the 2017/18 mark of 28.4% and is the lowest since 21.3% was seen in the 2012/13 season when wheat futures ran to their second highest levels of all time. 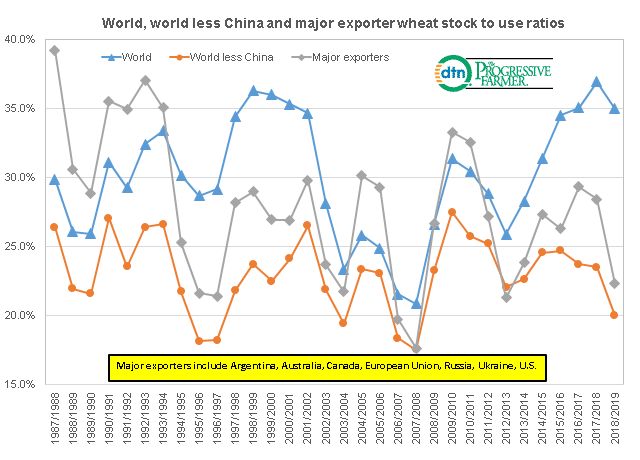