There are a number of reasons why it is expected that farmers will pare their 2018 corn plantings and increase soybean seedings with the currently high new crop soybean/ corn ratio one factor.

The continuous November soybean/December corn futures ratio from January 1996 to the present has a long-term average of 2.38 and plus and minus standard deviation lines respectively of 2.10 and 2.65 which means that this is where the SX/CZ ratio has traded 68% of the time over the past 22 plus years.

As a rule of thumb it is believed that if this ratio is at a level of 2.40 or higher through the late winter into early spring, farmers will plant more soybeans relative to corn as this crop at that ratio or higher generally will mean more profits.

Conversely, if the ratio is below 2.40 then corn seedings tend to increase vis-à-vis that of soybeans, though the attached graphic indicates however this is not necessarily the case.

The chart shows the percent change in U.S. corn and soybean acreage from the final planting figures the year prior to the new crop March prospective planting figures vs. the November soybean/December corn ratio the day before the planting intentions report.

For instance, the day before the March 2001 planting intentions report the SX2001/CZ2001 ratio was at a very low 1.88 which should have augured for an increase in corn plantings relative to the year prior and lower soybean seedings.

That was not the case as farmers indicated they would plant 3.6% less corn than they did in 2000 and 1.5% more soybeans.

On the other hand, heading into the March 2005 intentions report the November soybean 2005/December corn 2005 ratio was trading at a very high 2.61 which should have resulted in more soybean plantings and less corn area however the prospective planting figures showed corn area up a modest 0.6% and bean seedings down 1.7%.

It appears that since the surge in crop prices starting in 2007 the new crop soybean/corn ratio has done a better job of predicting relative acreage shifts between corn and soybeans so this year's lofty 2.59 ratio should result in more intended soybean acreage and less corn planted area. 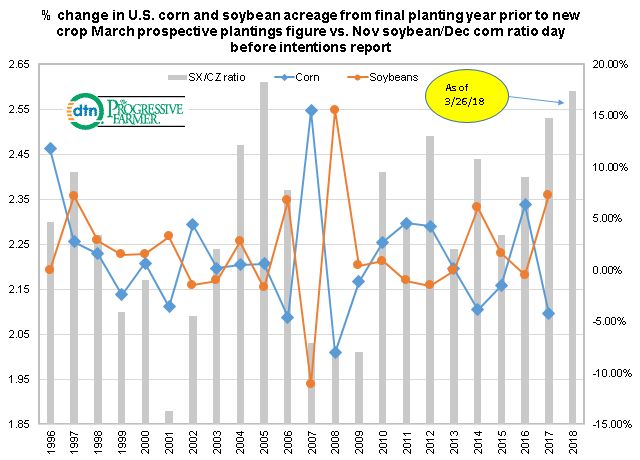