In a number of prior posts we have talked about the large increase in row crop acreage in North Dakota over the past two decades with corn and soybeans more profitable than some of the other crops traditionally sown up in that areas of the country including durum, hard red wheat, sunflowers and rapeseed among others.

This graphic shows the percent change in planted corn acreage from 1996 to 2017 for the top 18 producing states and the U.S corn on the left hand axis.

The surge in corn prices over the past few years on a flat price basis and vs. wheat has resulted in a number of Plains states that have dramatically increased their seedings of this crop.

In fact, most of the top 18 states increased their corn acreage though some eastern states such as Indiana, Michigan, North Carolina and Pennsylvania registered acreage declines over the past 21 years.

We also report the percent that each of the top 18 states corn acreage accounts for the national total, both in 1996 and 2017 on the right hand axis.

Even with their large increase in corn area seeded, last year's North Dakota's planted corn area accounted for only 3.8% of total U.S. acreage, far below the top two states of Iowa at 14.8% and Illinois at 12.4%.

Note however that North Dakota's percent of corn acreage has increased from the 1996 level of 0.9% and the 2.8% increase over the past 21 years trails only the 2.9% rise in Kansas's share of U.S. corn planted area with Illinois actually seeding the greatest decline. 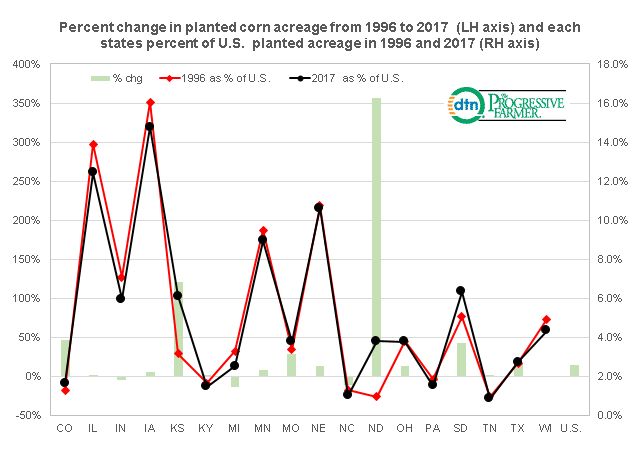