The two main stories in wheat are the abysmal shape of the hard red winter (HRW) variety grown in the Central and Southern Plains due to widespread drought conditions, and the fact that the resultant rally has made our wheat even less competitive in the world export markets.

This is why even with the lowest winter wheat seedings in over 100 years and the poor crop ratings wheat futures have only been able to mount the most modest of rallies.

This year's export sales pace is so laggard that USDA has been forced to pare this year's overseas projections by 25 million bushels each in both the February and March WASDE reports.

Though it is still early, total outstanding sales for the new crop year which begins June 1, 2018 and extends into May 31, 2019 is a mere 21.79 million bushels as of the second week in March.

This graphic shows new crop wheat sales as of the second week of March in million bushels and those sales as a percent of the USDA's new crop wheat export projection that was given at their annual Ag Outlook Forum conference which always takes place in late February.

We also tally the change in million bushels from the USDA's Ag Outlook export projection to what the actual cumulative export total is for that marketing year.

The USDA at this year's Ag Outlook Forum last month estimated 2018/19 U.S. wheat sales at 925 million bushels so what already is on the books constitutes 2.36% of that amount, the lowest percent in this regard since the 2012/13 season.

The question is whether this low amount of new crop wheat on the books suggests that the USDA Ag Outlook Forum estimate is perhaps too high.

Not necessarily so for much depends on how this year's U.S. and foreign wheat crops progress.

For example we mentioned that the last time total U.S. outstanding wheat export sales were this low as of the second week of March was in the 2010-11 season at 20.05 million bushels and that was 2.36% of the February 2010 USDA Ag Outlook Forum wheat export projection for the 2010/11 season of 850 million bushels.

It turned out that final U.S. wheat exports that year were 1.291 billion bushels, 441 million above what was projected in February 2010.

On the other hand, just three years ago, outstanding new crop wheat sales on the books as of the second week of March were 40.94 million bushels, 4.20% of that year's Ag Outlook projection of 975 million bushels but final 2015/16 wheat exports that year were 778 million, 197 million bushels less. 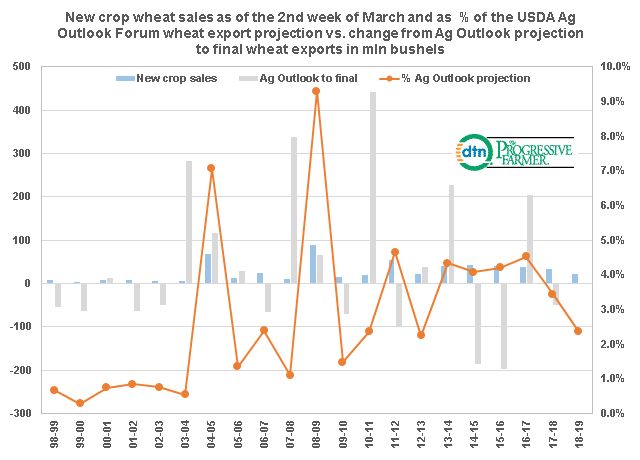