Quite a bit of discussion on how robust U.S. corn export sales have been over the past two months in concert with declining production prospects in Argentina.

With that country seeing its supply of exportable corn shrink rapidly and Brazil essentially out of the market till June it may be that the USDA will increase the estimate of U.S. overseas corn sales even more.

Note that USDA has hiked its export projection by 300 million bushels since the beginning of the year.

The question is whether the corn that has actually been sold will ship prior to the end of the corn marketing year August 31.

This is by far the largest percent of unshipped corn as of the second week of March at least since the 1989-90 season and probably ever.

With the latest USDA export projection at 2.225 billion bushels and 25 weeks from this point on the calendar to the end of August this means that that 57.2 million bushels have to ship each and every week over the next 25 weeks to attain the USDA target.

This chart shows this is close to 10 mln bushels above last year's pace and would be the largest shipment pace ever for this point in the marketing year surpassing the 49.6 million bushel pace two years ago.

Slow shipments are linked to the recent spurt in sales and also we imagine some logistical woes getting corn to the export terminals at the Gulf and PNW.

By this we mean a brutal winter so far in the Midwest impacting rail shipments and high water levels restricting barge movement down the Mississippi. 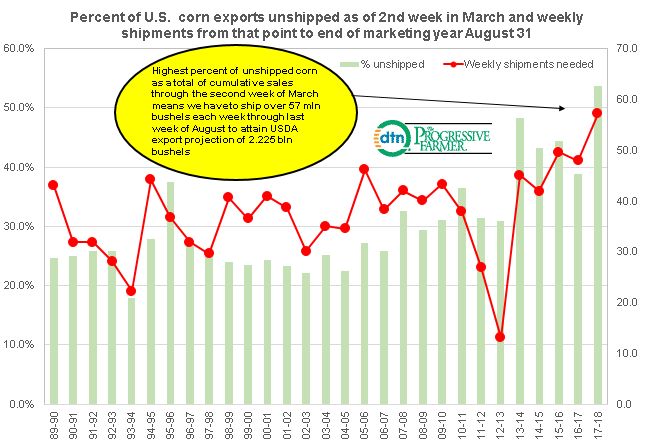