These USDA's estimates may be dated however, for though they note that heat and dryness in January and February that continued into early March reduced yield prospects for later, planted corn fields and results for the early planted crop have been lower than expected, severe drought conditions persist even as of this writing.

Some feel that this year's Argentine corn crop may be as low as 31-32 million tonnes.

A similar situation for soybeans that has succumbed to dry conditions with updated estimates for this crop closer to 43-44 million tonnes.

Supporting this contention is the realization that this year's cumulative precipitation from September 1 to the first week of March is far lower than seen in other years when corn and soybean yields were well below trend.

The USDA Secretary WASDE briefing slides show Argentine soil moisture in the six main crop area regions with 2013 along with 1997 being highlighted along with this year as seasons when rainfall was well below average and one of the graphics indicate that soil moisture this year is well below levels seen in both 2013 and 1997.

This graphic shows the percent that Argentina's corn and soybean yield deviated from the 30 year trend.

The latest USDA yield estimates this season are corn 15.3% below trend and soybeans 9.2% below trend.

With total moisture lower this year than in 1997 or 2013 so far this season this could mean further reductions in Argentina's corn and soybean yields which is the assumption of most private analysts. 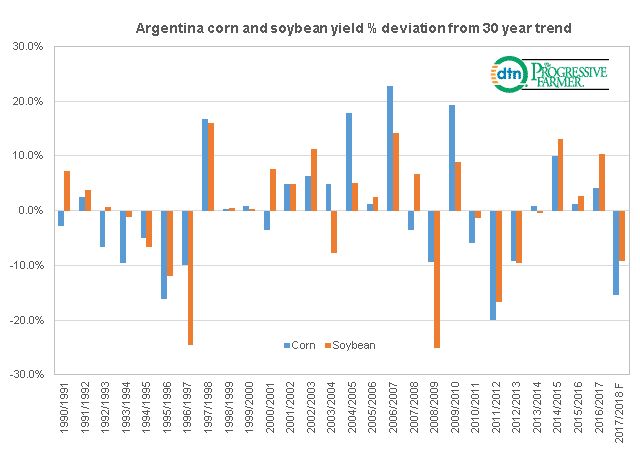