The U.S. appears to be playing a dangerous game with China over trade with the Trump administration recently slapping tariffs on Chinese washing machines and solar panels and threatening to do the same for their steel and aluminum exports.

Recall the President came into office saying he would label China a currency manipulator on day one as he felt China was purposely lowering the value of its currency to enhance its export competitiveness which has allowed it to amass a huge trade surplus with the U.S.

He also vowed to take a tougher position with China over its supposed violations of various trade agreements and said that China was not living up to its free market commitments in the World Trade Organization.

His first year in office however proved surprisingly quiet on those fronts based in part on the need for Washington to enlist Beijing's support for tougher action on North Korea.

Having now expressed doubts about China's commitment to reigning in North Korea's nuclear capabilities and ambitions, the White House's new combative tone against China has resulted in a de facto boycott against U.S. soybeans.

This has been amplified by more stringent Chinese standards for foreign material within the soybeans and the lower than normal protien content in the 2017 U.S. crop.

For the second month in a row, the USDA has pared the 2017/18 U.S. soybean export projection, this time by 60 million bushels vs. the 65 million reduction in January and both tmes they cited increased competition from Brazil but not said is the major inroads this South American country has made into what is by far the world's largest soybean importing nation.

This is down 21.6% vs. the 1.082 billion bushels of soybeans we had exported at a similar point in the season last year though the USDA has projected our total soybean export sales down just 3.4% from the 2.174 billion sold in the 2016/17 season.

The USDA has projected total Chinese soybean imports this year at 97.0 million metric tons so our total sales as of the first week of February are 23.8% which is the lowest percent of our sales to China as of their year end total since the 2007/08 season.

We do not know what quantity of soybeans the USDA figures China will import from the U.S. but over the past five years China has purchased on average 37.5% of their soybeans from the U.S. which this year would be 36.4 million of the 97.0 million tonnes Chinba is expected to import.

Our current cumulative sales to China through the first week of February totals 23.090 million and would represent only 63.5% of that total by this point in the marketing year, well below the year ago 81.5% and would represent the slowest sales pace to China also since the 2007/08 season.

Keep in mind over the past five years the U.S. has exported to China about 60% of our total overseas soybean sales. 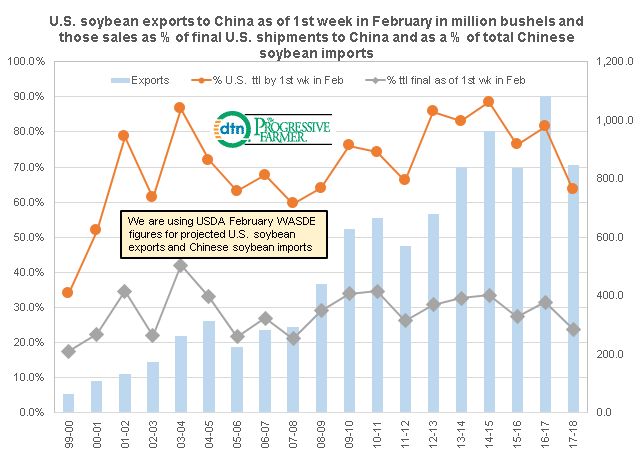