The outlook for U.S. soybean exports for the rest of the year looks rather grim as it is now becoming very apparent that even with a 65 mln bushel cut in projected exports last month, the USDA's 2017/18 2.160 bln export estimate is still too high with China having a de facto boycott on importation of U.S. soybeans.

This could be a quid pro quo in response to U.S. trade actions on washing machines and solar panels and threatened moves on aluminum and steel as China has been buying plenty of soybeans from Brazil while Beijing has also registered concerns about excess foreign material in U.S. soybean shipments along with the low protein content in the 2017 crop.

The situation for soybean meal exports is far different with the USDA's current 12.20 million short ton projection for the 2017/18 marketing year up 5.2% from the prior year's tally while estimating a 0.6% decline in projected soybean exports and a sharper 25.7& tumble in this year's soybean oil export sales vs. the 2016/17 final figure.

Certainly helping are ongoing weather issues in Argentina which is the world's largest exporter of both soybean oil and soybean meal.

This graphic shows U.S. soybean meal export sales and shipments in 1000 short tons as of the last week in January and on the right hand axis as a percent of the January WASDE projection.

Last week's export sales showed 8.049 million tons sold and other than the 9.204 million on the books in the 2014/15 season, this is the highest amount of soybean meal sold as of the last week in January ever.

This represents 66.0% of the USDA's 12.20 mln ton projection which is actually just below the 66.7% ten year average though over the past ten years the USDA has increased its soybean meal export projection by an average of 0.693 million tons.

Note however that the amount shipped as of the last week in January is 3.705 million tons which other than last year is the lowest total for this point in the marketing year since January 2012.

That figure is a mere 30.4% of the January 2018 WASDE projection and other than last year is the lowest percent in that regard since the 2006/07 season. 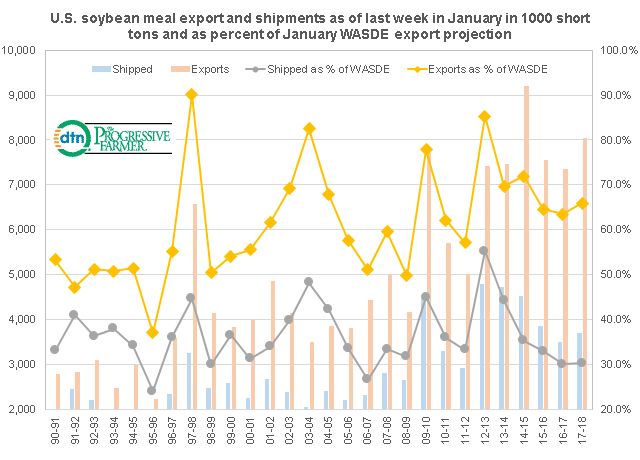