Given higher 2018 prospective net returns per acre for soybeans vs. corn in many Midwest locations, planted soybean acreage for the coming year is seen again at a new record topping the old peak set last year of 90.1 million acres.

In fact, domestic soybean seedings may top that of corn for the first time ever if one were to exclude 1983 when the PIK (payment in kind) program incentivized corn farmers not to seed that crop in that particular year.

A very dry last half of the growing season in 2017 resulted in last year's soybean yield falling 2.9 bushels per acre (bpa) from the 2016 record of 52.0 bpa, but soybean yields have been stellar over the past few seasons and there is no reason to assume with normal weather that yields for the upcoming season will not again top 50.0 bpa.

Hence, there is every expectation that soybean stocks and the stock to use ratio will remain at high levels for the 2018/19 season.

Each box contains a possible ending soybean stock figure in million bushels based on the sum of beginning stocks which is the current USDA 2017/18 ending stocks of 470 million bushels, given in the January 2018 WASDE report added to production which is yield times the planted acreage figure times 99% which has been the average harvested/planted soybean acreage ratio over the past number of years.

From this sum, we subtract demand which we are estimating at 4.370 billion bushels, up 120 million from this year's demand total and has been the ten year average of the year to year increase in total soybean consumption.

Those cells highlighted in yellow are those where the ending stocks divided by the demand of 4.370 billion bushels is equal to or greater than this year's 11.0% stock to use ratio.

We have seen some analytical firms project 2018 U.S. soybean seedings at 91.0 million acres and if yields were to match the year ago 52.0 bpa this would result in an ending stocks figure of 812 million bushels. 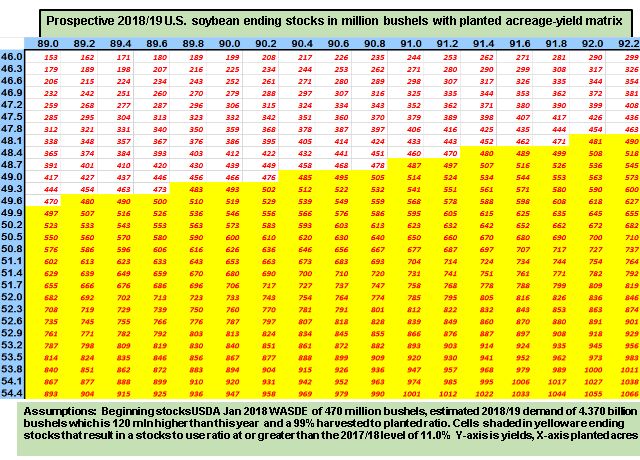