In an earlier post, we noted that U.S. soybean export sales as of the third week in November as a percent of the November USDA WASDE export projection was running at the slowest pace for this time of year since the 2006-07 season and the third lowest since the 2000/01 marketing year.

If this sluggish pace of exports continues, there is a very good chance of seeing a lower U.S. soybean export projection in subsequent WASDE reports, especially if forecasts for another year of bumper South American soybean production comes true.

Now we turn our attention to corn especially in light of the USDA decision to increase its export projection for U.S. corn this year by 75 million bushels to 1.925 billion bushels in the November WASDE report.

With sales already lagging, the decision by USDA to hike our overseas shipments seemed surprising though they did cite less competition out of Ukraine, lower prices and less sorghum production in Mexico heightening their need for imported feed grains.

A look at the specific figures from the latest export sales report shows total sales so far at 843.4 million bushels and shipments at 269.4 million so these are respectively 43.8% and 14.0% of the November 2017 USDA WASDE export projection.

While attaining the USDA goal of 1.925 billion bushels may be a stretch, the current corn sales pace is closer to average than that for soybeans so it may be doable especially if Brazil's safrina or second corn crop is not as sizable as the one produced last year. 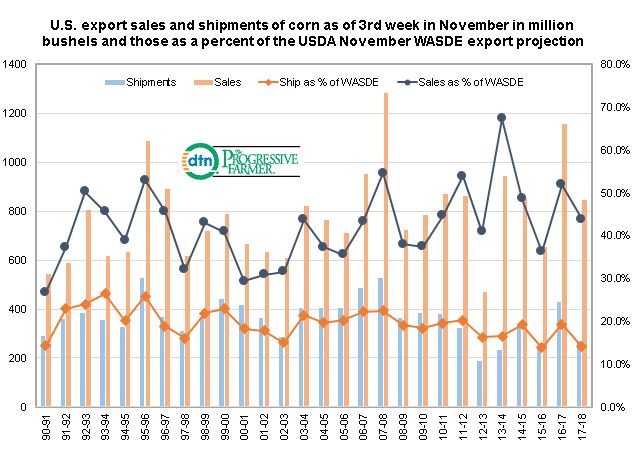